Under normal conditions, conducting a randomized clinical trial is challenging. Throw in a pandemic and things like site selection, patient recruitment and patient follow-up can be particularly vexing. In any study, subjects need to be retained long enough so that outcomes can be measured; during a period when there are so many potential disruptions, this can become quite difficult. This issue of loss to follow-up recently came up during a conversation among a group of researchers who were troubleshooting challenges they are all experiencing in their ongoing trials. While everyone agreed that missing outcome data is a significant issue, there was less agreement on how to handle this analytically when estimating treatment effects.

For me, this discussion quickly brought to mind two posts I did on missing data, where I reflected on the different missing data mechanisms (MCAR, MAR, and NMAR) and explored when it might be imperative to use multiple imputation as part of the analysis.

In light of the recent conversation, I wanted to revisit this issue of loss to follow-up in the context of a clinical trial where the outcome measure is collected at baseline (about which I’ve written about before, here and here) and we can be fairly certain that this baseline measurement will be quite well balanced at baseline.

In my earlier posts on missing data, I described the observed and missing data processes using a directly acyclic graphs (DAGs), which allow us to visualize the assumed causal relationships in our model. Here is a DAG for a clinical trial that collects baseline measure \(Y\) at baseline (\(Y_0\)) and again one year later (\(Y_1\)):

In the scenario depicted in this DAG, both \(Y_0\) and \(A\) potentially influence the (possibly unobserved) outcome \(Y_1\) and whether there is loss to follow-up \(R_Y\). (I have explicitly left out the possibility that \(Y_1\) itself can impact missingness, because this is a much more challenging problem - not missing at random or NMAR.)

The strengths of the relationships between the variables are determined by the parameters \(\delta\), \(\alpha\), and \(\beta\). (I have fixed the direct relationship between \(Y_0\) and \(Y_1\) to a value of 1, but there is no reason that needs to be so.) The dashed line from \(Y_0\) to the causal line connecting \(A\) and \(Y_1\) which has parameter \(\lambda\) reflects the possibility that the treatment effect of \(A\) will vary across different levels of the baseline measurement (i.e., there is an interaction between \(Y_0\) and \(A\)).

For the purposes of this simulation, I am assuming this linear relationship:

I am using \(-\lambda\) in order to simulate a situation where patients with lower values of \(Y_0\) actually have larger overall treatment effects than those with higher values.

The missing data mechanism is also linear, but on the logistic scale. In this scenario, patients with lower baseline values \(Y_0\) are more likely to be lost to follow-up than patients with higher values (assuming, of course, \(\alpha > 0\)):

I am using the simstudy package to simulate data from these models, which allows me to define the data generating process described above. First, let’s load the necessary libraries:

The missing data generating process is defined in table defM:

With all the definitions and parameters set, we are ready to generate the data:

Now, with the data in hand, we can estimate the treatment effect. In this case, I will fit three different models. The first assumes that there was no missing data at all (i.e., we had full access to \(Y_1\) for all study participants). The second is an analysis using only cases with complete data, which ignores missing data entirely and assumes that the missing data process is MCAR (missing completely at random). The third analysis uses multiple imputation to generate values for the missing cases based on distributions of the observed data - and does this repeatedly to come up with a series of data sets (in this case 20). In this last analysis, a model is fit for each of the 20 data sets, and the results are pooled:

Here is a figure that shows the estimated regression lines for each of the models (showed sequentially in animated form). In all three cases, we are adjusting for baseline measurement \(Y_0\), which is a good thing to do even when there is good balance across treatment arms; this tends to reduce standard errors. Also note that I am ignoring the possibility of heterogeneous treatment effects with respect to different levels of \(Y_0\) (determined by \(\lambda\) in the data generation process); I am effectively estimating the average treatment effect across all levels of \(Y_0\).

Estimating the bias of each modeling approach

Using the results from the iterations, I estimated the bias $_{sm} for each set of assumptions \(s\) and model \(m\) as:

The following figure shows \(\hat{\text{B}}_{sm}\) for each of the three modeling approaches: 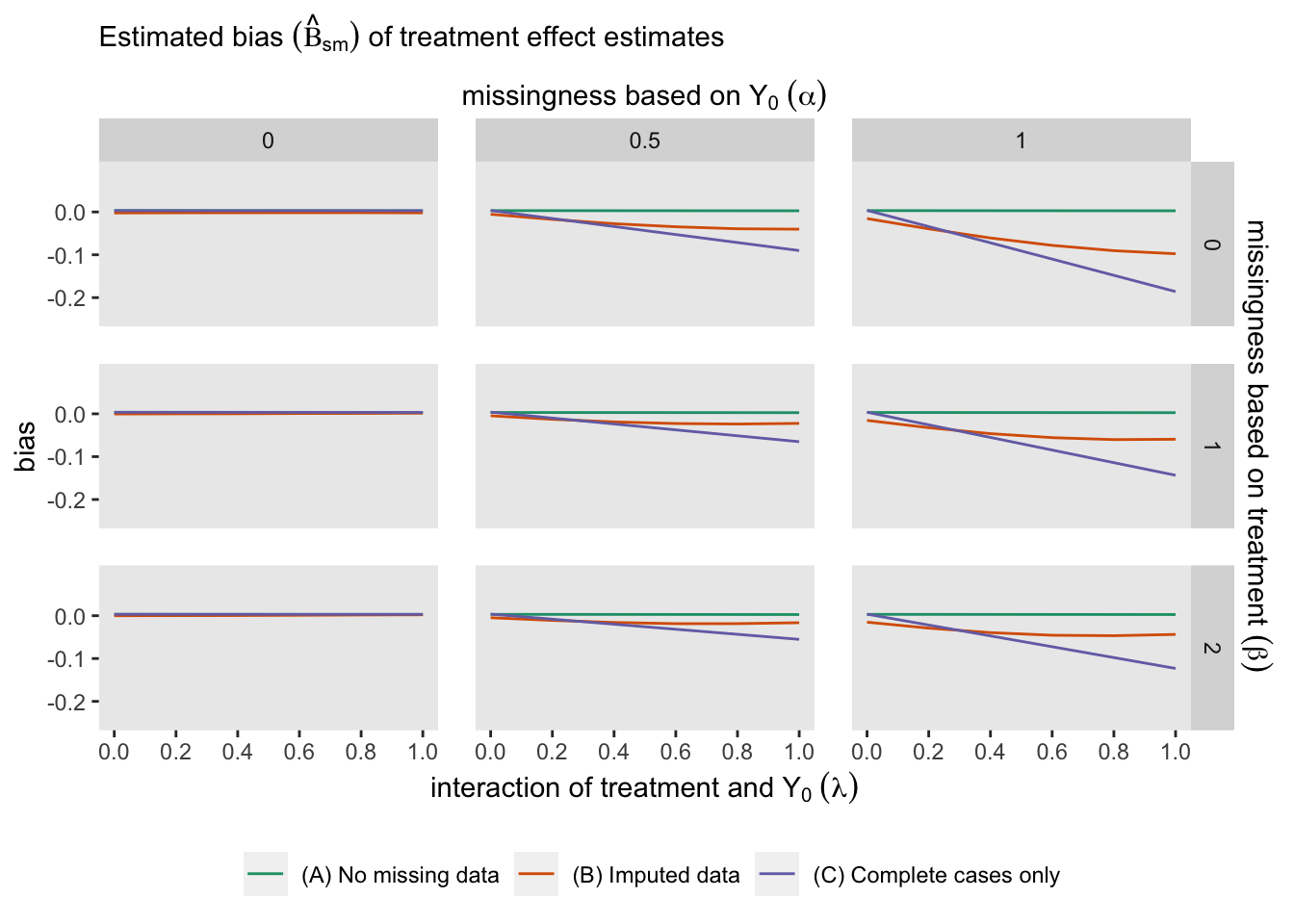 It is clear that if we have no missing data, all the estimates are unbiased. And in this case, it does not appear that missingness related specifically to treatment arm (determined by parameter \(\beta\)) does not have much of an impact. However bias is impacted considerably by both heterogeneous treatment effect (parameter \(\lambda\)) and missingness related to \(Y_0\) (parameter \(\alpha\)), and especially the combination of both \(\alpha\) and \(\lambda\).

If missingness is independent of \(Y_0\) (\(\alpha = 0\)), there is no induced bias just using complete data (model B), even with substantial heterogeneity of treatment effect (\(\lambda = 1\)). With moderate missingness due to \(Y_0\) (\(\alpha = 0.5\)), there is still no bias for the complete data analysis with low heterogeneity. However, bias is introduced here as heterogeneity becomes more pronounced. Using imputation reduces a good amount of the bias. Finally, when missingness is strongly related to \(Y_0\), both the complete data and imputed data analysis fare poorly, on average. Although multiple imputation worked well in our initial data set above with \(\alpha = 1\), the figure from the repeated simulations suggests that multiple imputation did not perform so well on average at that level. This is probably due to the fact that if there is a lot of missing data, imputation has much less information at its disposal and the imputed values are not so helpful.

Here is the code used to generate the iterative simulations: