As I mentioned last time, I am working on an update of simstudy that will make generating survival/time-to-event data a bit more flexible. I previously presented the functionality related to competing risks, and this time I’ll describe generating survival data that has time-dependent hazard ratios. (As I mentioned last time, if you want to try this at home, you will need the development version of simstudy that you can install using devtools::install_github(“kgoldfeld/simstudy”).)

Here is a simulated example that assumes a constant log hazard ratio of \(-0.7\):

When generating data, we may not always want to be limited to a situation where the hazard ratio is constant over all time periods. To facilitate this, it is possible to specify two different data definitions for the same outcome, using the transition field to specify the point at which the second definition replaces the first. (While it would theoretically be possible to generate data for more than two periods, the process is more involved, and has not been implemented.)

The survival curve for the sample with \(x=1\) has a slightly different shape under this data generation process compared to the previous example under a constant hazard ratio assumption; there is more separation early on (prior to day 150), and then the gap is closed at a quicker rate. 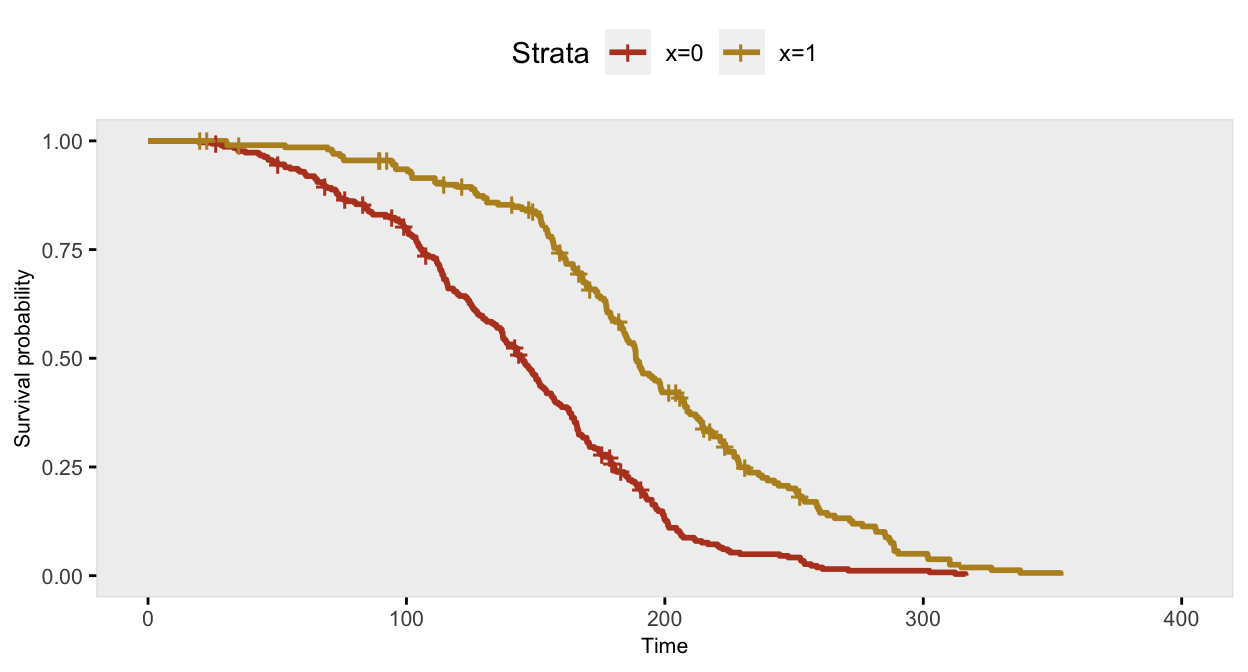 If we ignore the possibility that there might be a different relationship over time, the Cox proportional hazards model gives an estimate of the log hazard ratio quite close to -0.70:

However, further inspection of the proportionality assumption should make us question the appropriateness of the model. Since \(p<0.05\), we would be wise to see if we can improve on the model.

We might be able to see from the plot where proportionality diverges, in which case we can split the data set into two parts at the identified time point. (In many cases, the transition point or points won’t be so obvious, in which case the investigation might be more involved.) By splitting the data at day 150, we get the desired estimates:

And the diagnostic test of proportionality confirms the appropriateness of the model:

The actual data generation process implemented in simstudy is based on an algorithm described in this paper by Peter Austin.