Here’s the scenario: we have an intervention that we think will improve outcomes for a particular population. Furthermore, there are two sub-groups (let’s say defined by which of two medical conditions each person in the population has) and we are interested in knowing if the intervention effect is different for each sub-group.

This is a pretty straightforward, text-book scenario. Sub-group analysis is common in many areas of research, including health services research where I do most of my work. It is definitely an advantage to know ahead of time if you want to do a sub-group analysis, as you would in designing a stratified randomized controlled trial. Much of the criticism of these sub-group analyses arises when they are not pre-specified and conducted in an ad hoc manner after the study data have been collected. The danger there, of course, is that the assumptions underlying the validity of a hypothesis test are violated. (It may not be easy to convince folks to avoid hypothesis testing.) In planning ahead for these analyses, researchers are less likely to be accused of snooping through data in search of findings.

So, given that you know you want to do these analyses, the primary issue is how they should be structured. In particular, how should the statistical tests be set up so that we can draw reasonable conclusions? In my mind there are a few ways to answer the question.

Here are three models that can help us assess the effect of an intervention on an outcome in a population with at least two sub-groups:

where \(Y_i\) is the outcome for subject \(i\), \(T_i\) is an indicator of treatment and equals 1 if the subject received the treatment, and \(D_i\) is an indicator of having the condition that defines the second sub-group. Model 1 assumes the medical condition can only affect the outcome. Model 2 assumes that if the intervention does have an effect, it is the same regardless of sub-group. And Model 3 allows for the possibility that intervention effects might vary between sub-groups.

This is not a path typically taken, for reasons we will see at the end when we explore the relative power of each test under different effect size scenarios.

In the third and last approach, we start by comparing Model 3 with Model 1 using a global F-test. In this case, we are asking the question of whether or not a model that includes treatment as a predictor does “better” than a model that only adjust for sub-group membership. The null hypothesis can crudely be stated as \(\text{H}_{01}\): \(\text{Model }3 = \text{Model }1\). If we reject this hypothesis (and conclude that the intervention does have some sort of effect, either generally or differentially for each sub-group), then we are free to evaluate Models 2 and 3 to see if the there is a varying affect or not.

Here we can use cutoffs of 0.05 in our hypothesis tests. Again, we only make errors in the second step if we’ve made a mistake in the first step. The errors are nested and not additive.

This first simulation shows that the error rates of the three approaches are all approximately 5% under the assumption of no intervention effect. That is, given that there is no effect of the intervention on either sub-group (on average), we will draw the wrong conclusion about 5% of the time. In these simulations, the outcome depends only on disease status and not the treatment. Or, in other words, the null hypothesis is in fact true:

If we use a cutoff of 0.05 for the second approach, we can see that the overall error rate is indeed inflated to close to 10%:

Now that we have established at least three valid testing schemes, we can compare them by assessing the power of the tests. For the uninitiated, power is simply the probability of concluding that there is an effect when in fact there truly is an effect. Power depends on a number of factors, such as sample size, effect size, variation, and importantly for this post, the testing scheme.

The plot below shows the results of estimating power using a range of assumptions about an intervention’s effect in the two subgroups and the different approaches to testing. (The sample size and variation were fixed across all simulations.) The effect sizes ranged from -0.5 to +0.5. (I have not included the code here, because it is quite similar to what I did to assess the error rates. If anyone wants it, please let me know, and I can post it on github or send it to you.)

The estimated power reflects the probability that the tests correctly rejected at least one null hypothesis. So, if there was no interaction (say both group effects were +0.5) but there was a main effect, we would be correct if we rejected the hypothesis associated with the main effect. Take a look a the plot: 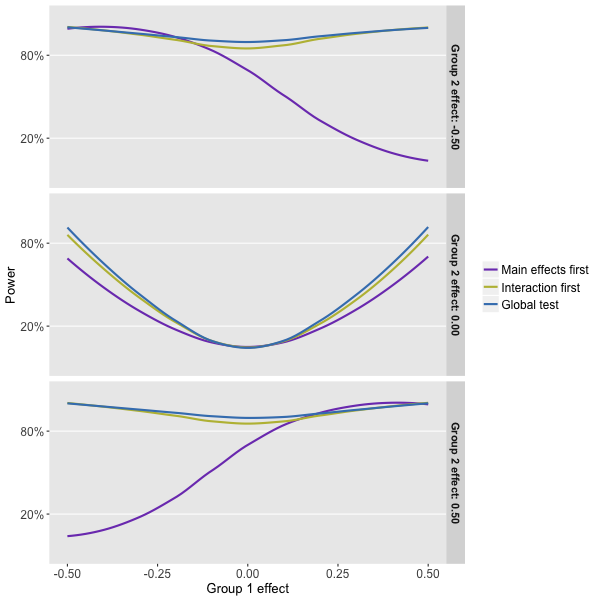 And, we see clearly that the first approach suffers from a fatal flaw. When the sub-group effects are offsetting, as they are when the effect is -0.5 in subgroup 1 and +0.5 in subgroup 2, we will fail to reject the null that says there is no main effect. As a result, we will never test for interaction and see that in fact the intervention does have an effect on both sub-groups (one positive and one negative). We don’t get to test for interaction, because the rule was designed to keep the error rate at 5% when in fact there is no effect, main or otherwise.

Of course, things are not totally clear cut. If we are quite certain that the effects are going to be positive for both groups, the second approach is not such a disaster. In fact, if we suspect that one of the sub-group effects will be large, it may be preferable to go with this approach. (Look at the right-hand side of the bottom plot to see this.) But, it is still hard to argue (though please do if you feel so inclined), at least based on the assumptions I used in the simulation, that we should take any approach other than the global test.