A researcher reached out to me the other day to see if the simstudy package provides a quick and easy way to generate data from a truncated distribution. Other than the noZeroPoisson distribution option (which is a very specific truncated distribution), there is no way to do this directly. You can always generate data from the full distribution and toss out the observations that fall outside of the truncation range, but this is not exactly efficient, and in practice can get a little messy. I’ve actually had it in the back of my mind to add something like this to simstudy, but have hesitated because it might mean changing (or at least adding to) the defData table structure.

However, it may be time to go for it. The process and coding are actually relatively straightforward, so there is no real reason not to. I was developing a simple prototype for several probability distributions (though the concept can easily be applied to any distribution where the cumulative distribution function, or CDF, is readily accessible), and am sharing here in case you need to do this before it is available in the package, or if you just want to implement yourself.

What is a truncated distribution?

A truncated probability distribution is one derived from limiting the domain of an existing distribution. A picture is worth a thousand words. On the left, we have a histogram for 10,000 observations drawn from a full (non-truncated) Gaussian or normal distribution with mean 0 and standard deviation 3. In the middle, the histogram represents data drawn from the positive portion of the same distribution (i.e. is truncated at the left by 0). And on the far right, the truncation is defined by the boundaries \((-3, 3.5)\):

Leveraging the uniform distribution and a CDF

Again - visuals help to explain how this works. To start, here are several CDFs of normal distributions with different means and variances:

Now, we are ready to create a simple function rnormt that implements this: The pnorm function provides the CDF at a particular value:

Here, I am generating the data plotted above, showing the code this time around.

Going beyond the normal distribution

To conclude, here is a plot of gamma-based distributions using rgammat. And I’ve added similar plots for beta and Poisson distributions - I’ll leave it to you to write the functions. But, if you don’t want to do that, simstudy will be updated at some point soon to help you out. 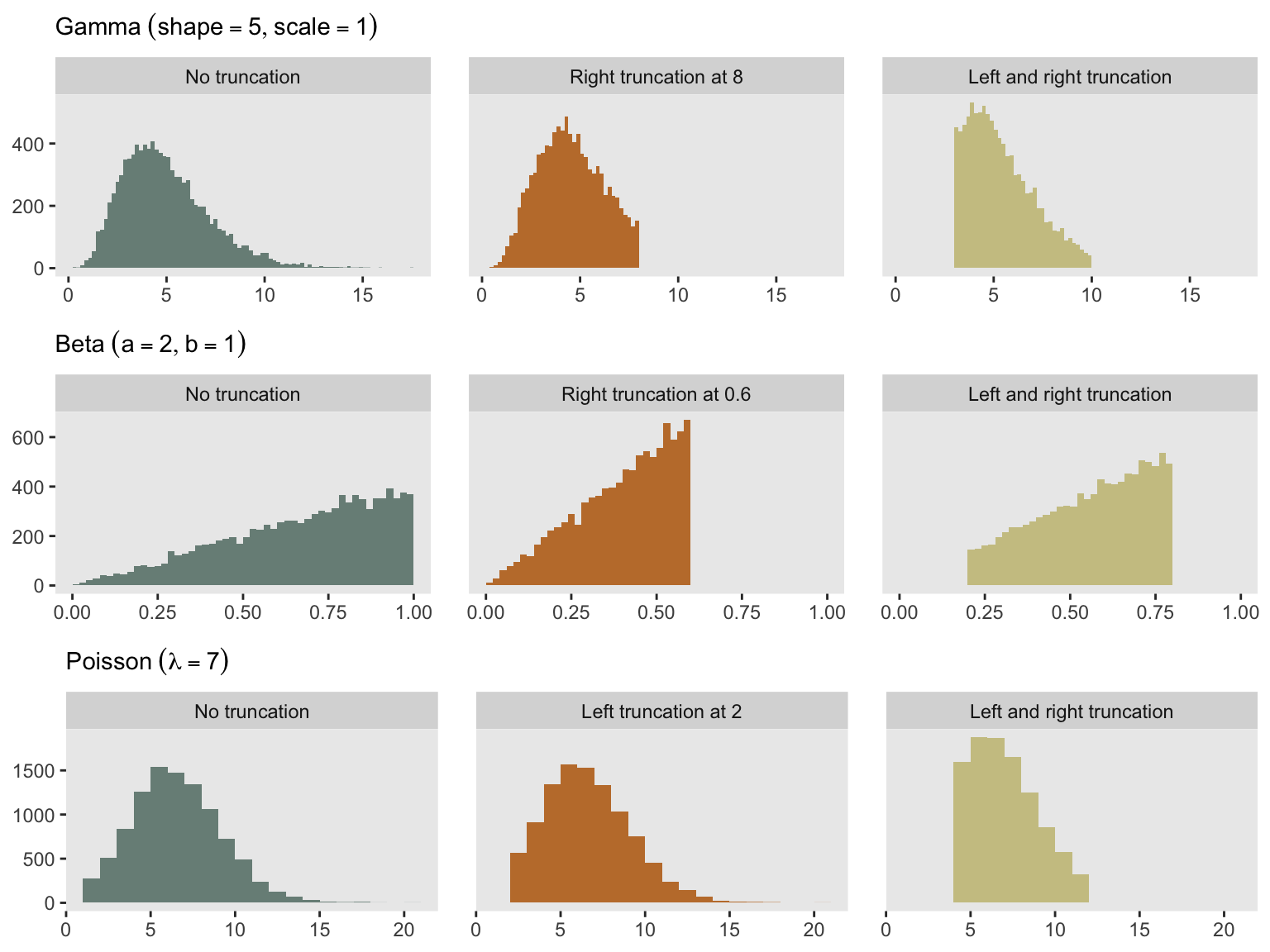