The ROC (receiver operating characteristic) curve visually depicts the ability of a measure or classification model to distinguish two groups. The area under the ROC (AUC), quantifies the extent of that ability. My goal here is to describe as simply as possible a process that serves as a foundation for the ROC, and to provide an interpretation of the AUC that is defined by that curve.

The classic application for the ROC is a medical test designed to identify individuals with a particular medical condition or disease. The population is comprised of two groups of individuals: those with the condition and those without. What we want is some sort of diagnostic tool (such as a blood test or diagnostic scan) that will identify which group a particular patient belongs to. The question is how well does that tool or measure help us distinguish between the two groups? The ROC (and AUC) is designed to help answer that question.

We can actually only assess the quality of the test if we know the true group membership of the individuals. So, our plan is to take measurements on this known sample, make predictions based on the test, and see how our predictions match up to reality. The ROC is one way to characterize how well our test matches up to reality.

While we make a binary decision about group membership - either we think they have the condition or they do not - the underlying measure that is used to make that determination may be continuous, like a score. For example, a hypothetical test might return a score between -10 and 10. We can pick a threshold anywhere along the continuum that will form the basis of our prediction. For example, we might say that any score > 0 indicates the condition is present, otherwise it is not. This simple test will be useful as a tool to discriminate between the disease and non-disease groups if that threshold indeed distinguishes the groups. 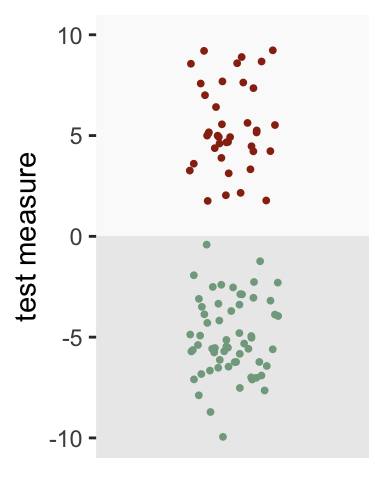 The world is not always so neat and clean 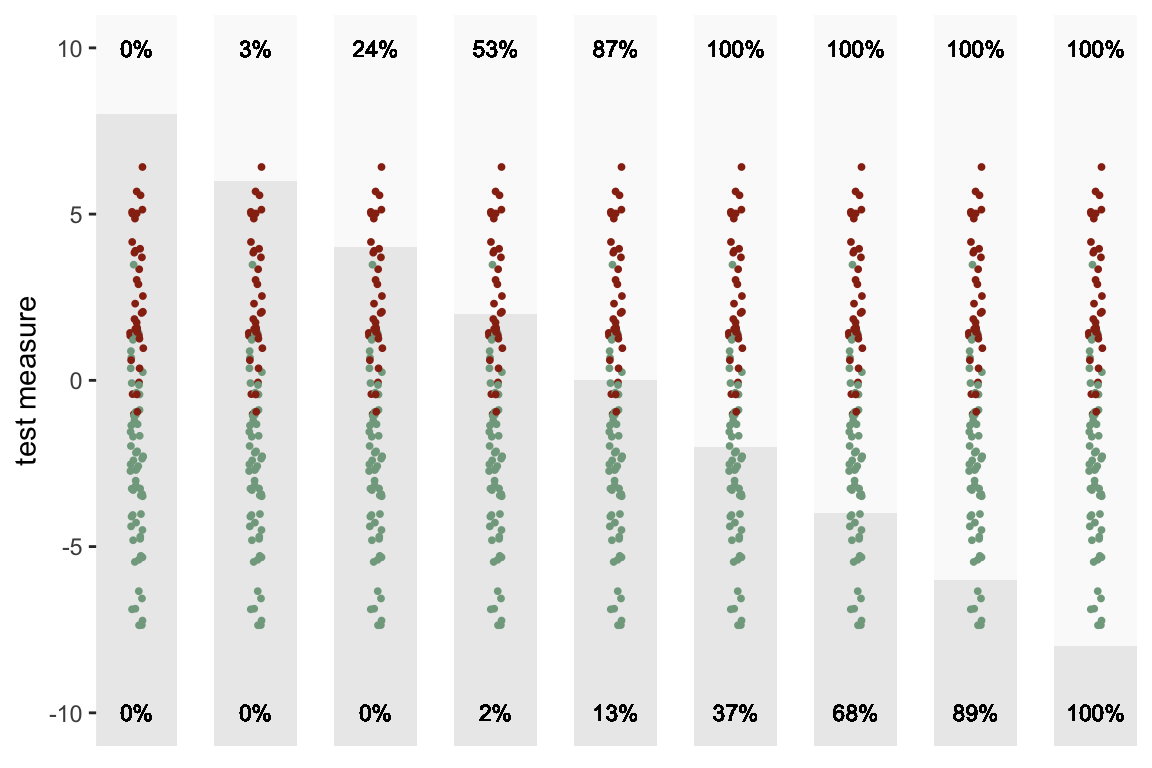 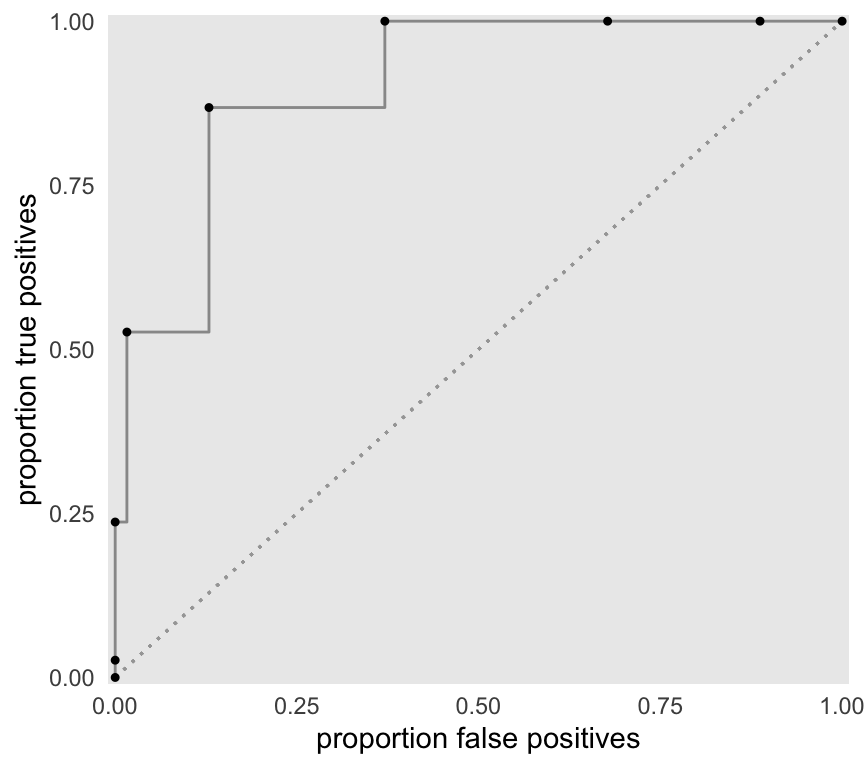 The ROC above is built from only 9 thresholds. If we consider all possible thresholds (continuous between -10 and 10), this is the the more complete curve: 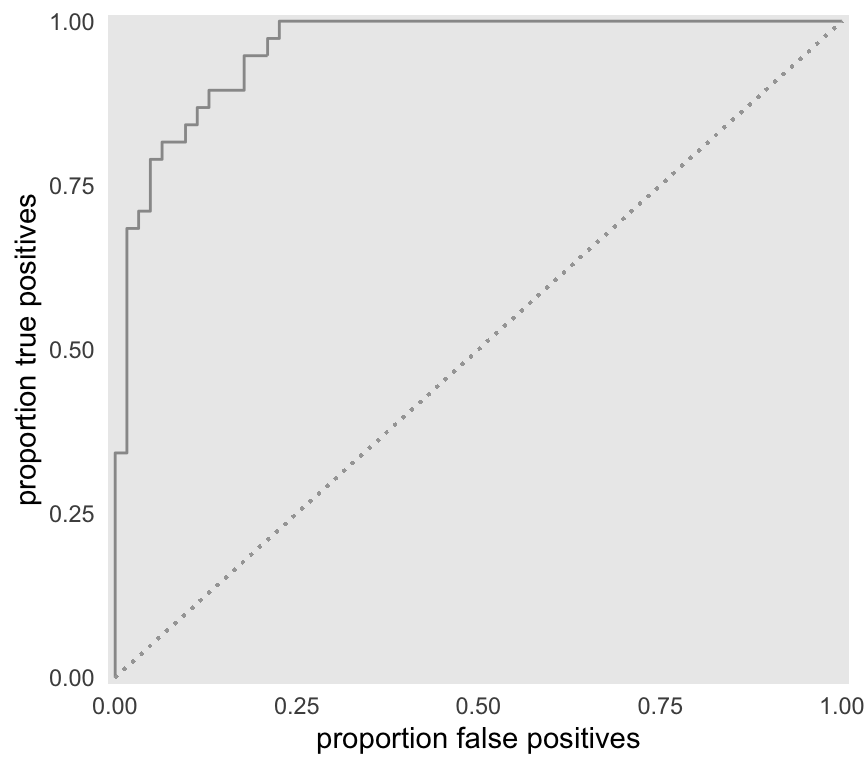 Area under the ROC

The AUC is, well, the area under the ROC. The maximum AUC will be 1 when there is complete separation (there is an example of this below), and the minimum is 0.5 (depicted by the diagonal line) when there is no separation by the test measure (again, an example will follow). We can estimate this area by integrating an approximate function defined by the data between 0 and 1.

Here is a simple function that returns a value of TRUE if the random draw from the disease group is greater:

And here is the proportion of 1000 draws where the measure from the disease group draws is greater (this is expected to be close to the AUC, which was estimated above to be 0.957):

Of course, R has several packages that provide ROCs and calculate AUCs. I’m using package pROC here just to show you that my AUC estimate is not totally crazy:

As I indicated above, the AUC can generally range from 0.5 to 1.0. There is no hard and fast rule about what is a “good” AUC - it will depend on the application. Certainly, anything below 0.7 or maybe even 0.8 is pretty weak. I am going to conclude by generating data at the two extremes.

As we move the threshold lower, both the proportion of true positives and false positives steadily increase: 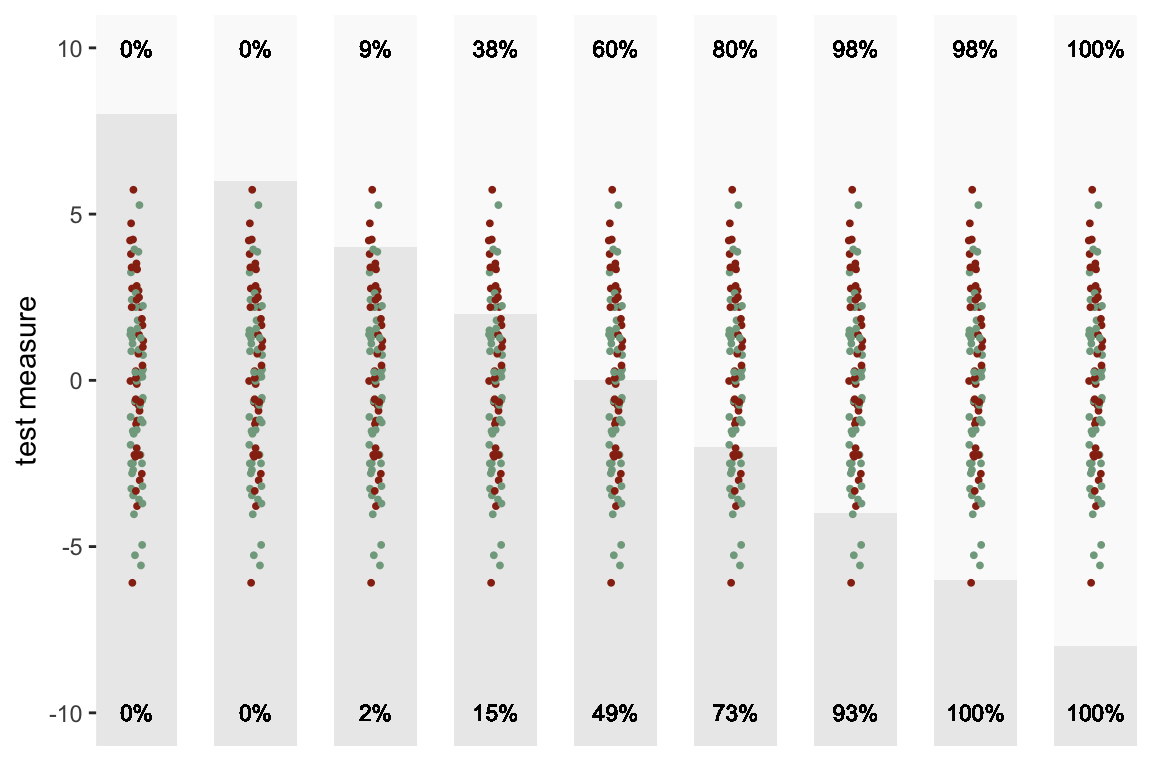 As a result, the ROC hangs fairly close to the diagonal lower bound. 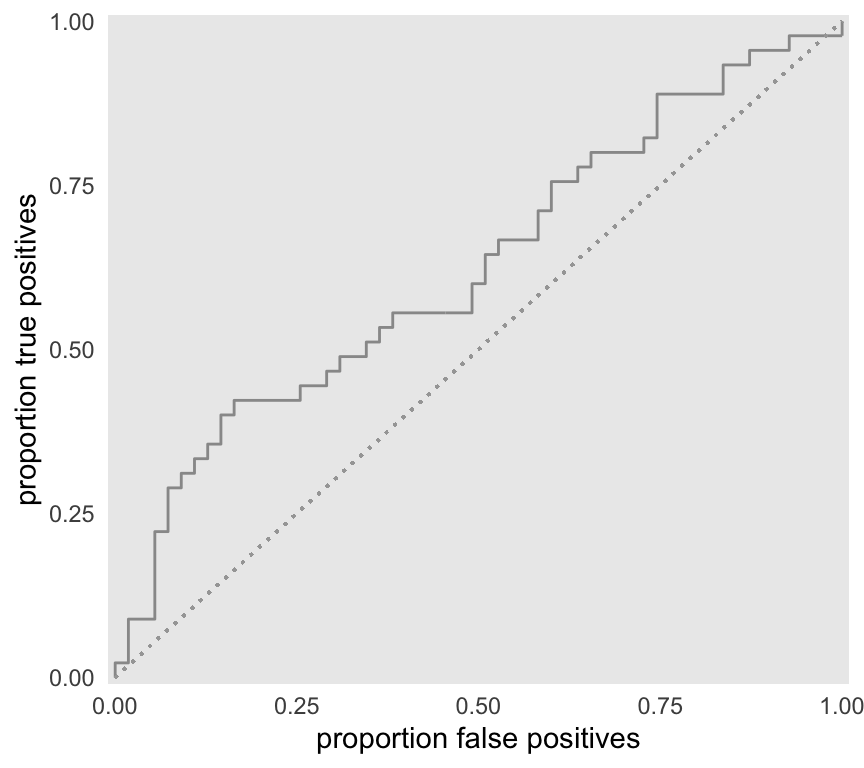 We would expect the AUC to be fairly close to 0.5, which it is:

At the other extreme, the mean of the disease group is high enough so that there is no overlap between the two groups. In this case, the curve follows along Y-axis before going across the X-axis. We can achieve 100% true positives and no false positives if threshold is set at some point that is below the minimum of the disease group, and above the maximum of the non-disease group. Zero will be the ideal cut-off point for this example. 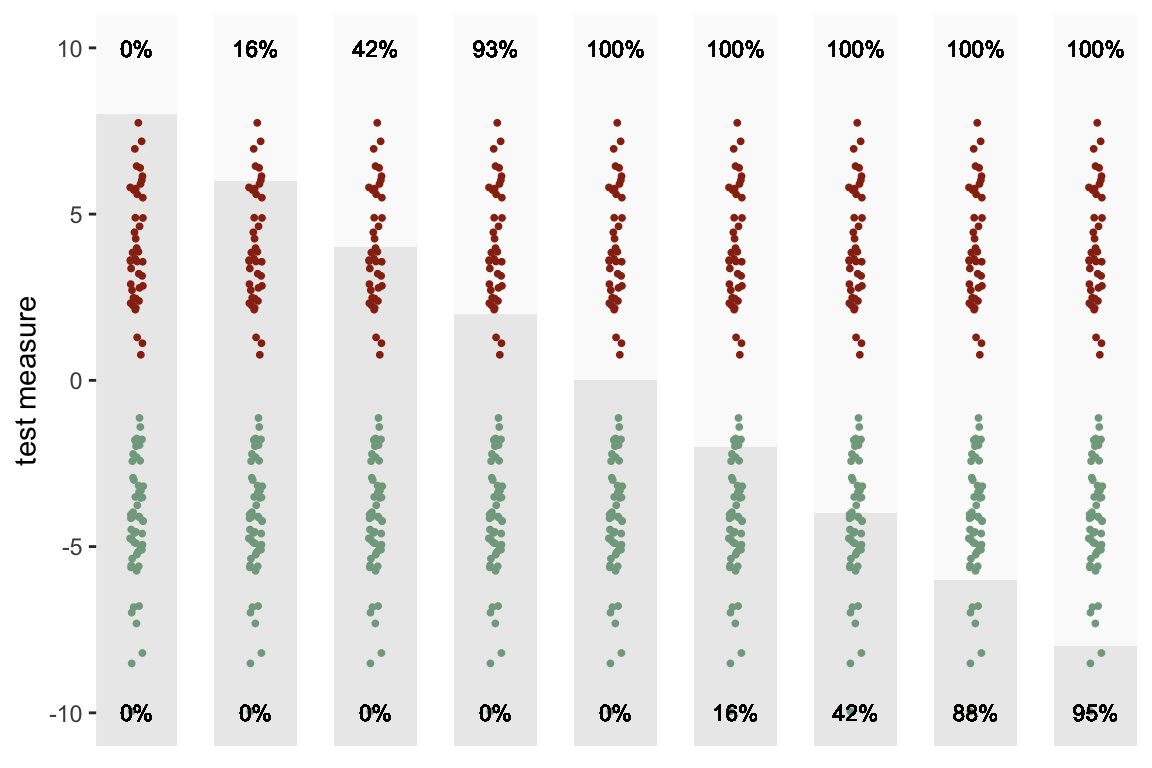 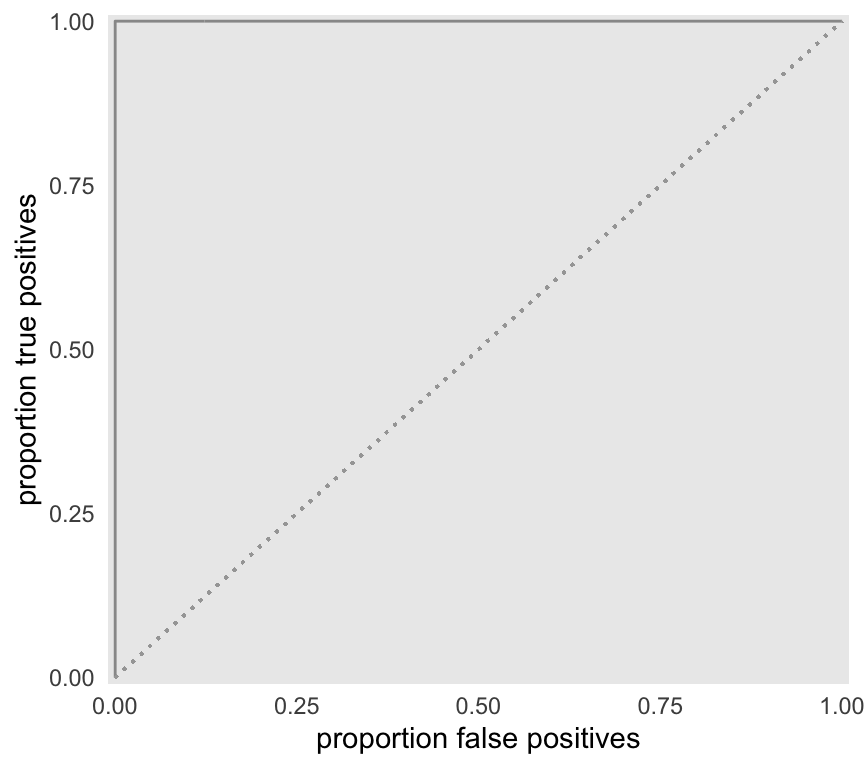 As expected the AUC is equal to 1:

Logistic regression and the ROC

Just a quick note to conclude. The ROC is often used in conjunction with classification problems based on logistic regression modeling. In this case, we may not have a single underlying test measure, but rather we may have multiple predictors or measures. In this case, group assignment decision needs to be based on a summary of these multiple measures; one logical candidate is the individual’s predicted probability estimated by model.