simstudy version 0.2.1 has just been submitted to CRAN. Along with this release, the big news is that I’ve been joined by Jacob Wujciak-Jens as a co-author of the package. He initially reached out to me from Germany with some suggestions for improvements, we had a little back and forth, and now here we are. He has substantially reworked the underbelly of simstudy, making the package much easier to maintain, and positioning it for much easier extension. And he implemented an entire system of formalized tests using testthat and hedgehog; that was always my intention, but I never had the wherewithal to pull it off, and Jacob has done that. But, most importantly, it is much more fun to collaborate on this project than to toil away on my own.

You readers, though, are probably more interested in the changes that, as a user, you will notice. There are a number of bug fixes (hopefully you never encountered those, but I know some of you have, because you have pointed them out to me) and improved documentation, including some new vignettes. There is even a nice new website that is created with the help of pkgdown.

The most exciting extension of this new version is the ability to modify data definitions on the fly using externally defined variables. Often, we’d like to explore data generation and modeling under different scenarios. For example, we might want to understand the operating characteristics of a model given different variance or other parametric assumptions. There was already some functionality built into simstudy to facilitate this type of dynamic exploration, with updateDef and updateDefAdd, that allows users to edit lines of existing data definition tables. Now, there is an additional and, I think, more powerful mechanism - called double-dot reference - to access variables that do not already exist in a defined data set or data definition.

It may be useful to think of an external reference variable as a type of hyperparameter of the data generation process. The reference is made directly in the formula itself, using a double-dot (“..”) notation before the variable name.

Here is a simple example:

B0, B1, and sigma2 are not part of the simstudy data definition, but will be set external to that process, either in the global environment or within the context of a function.

It is easy to create a new data set on the fly with different slope and variance assumptions without having to go to the trouble of updating the data definitions.

Double-dot references can be flexibly applied using lapply (or the parallel version mclapply) to create a range of data sets under different assumptions: 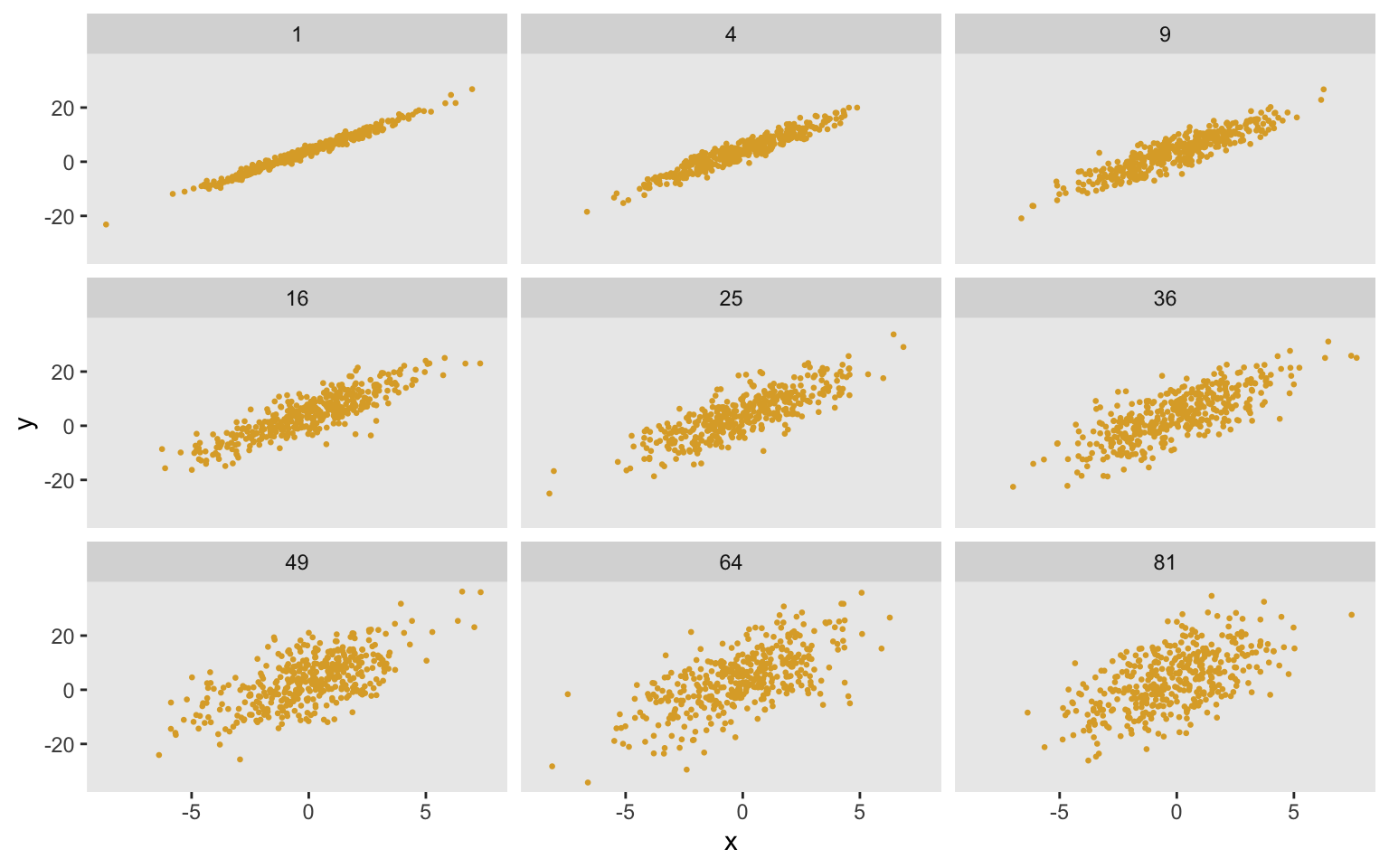 Double-dot referencing is also vector friendly. For example, if we want to create a mixture distribution from a vector of values (which we can also do using a categorical distribution), we can define the mixture formula in terms of the vector. In this case we are generating permuted block sizes of 2 and 4:

There are a few other changes to the package that are described here (but look for version 0.2.0 - we found a pretty major bug right away and fixed it, hence 0.2.1). Moving forward, we have some more things in the works, of course. And if you have suggestions of your own, you know where to find us.

Here’s a more detailed example to show how double-dot references simplify things considerably in a case where I originally used the updateDef function. In a post where I described regression to the mean, there is an addendum that I adapt here using double-dot references. I’m not going into the motivation for the code here - check out the post if you’d like to see more.)

And here is the updated code:

The code is much cleaner and the data generating process doesn’t really lose any clarity. Importantly, this change has allowed me to take advantage of the apply approach (rather than using a loop). I’d conclude that double-dot references have the potential to simplify things quite a bit.