Kids today are so sophisticated (at least they are in New York City, where I live). While I didn’t hear about the chi-square test of independence until my first stint in graduate school, they’re already talking about it in high school. When my kids came home and started talking about it, I did what I usually do when they come home asking about a new statistical concept. I opened up R and started generating some data. Of course, they rolled their eyes, but when the evening was done, I had something that might illuminate some of what underlies the theory of this ubiquitous test.

Actually, I created enough simulations to justify two posts - so this is just part 1, focusing on the \(\chi^2\) distribution and its relationship to the Poisson distribution. Part 2 will consider contingency tables, where we are often interested in understanding the nature of the relationship between two categorical variables. More on that the next time.

The following code defines a data set with two standard normal random variables and their sum:

The standard normal has mean zero and variance one. Approximately 95% of the values will be expected to fall within two standard deviations of zero. Here is your classic “bell” curve: 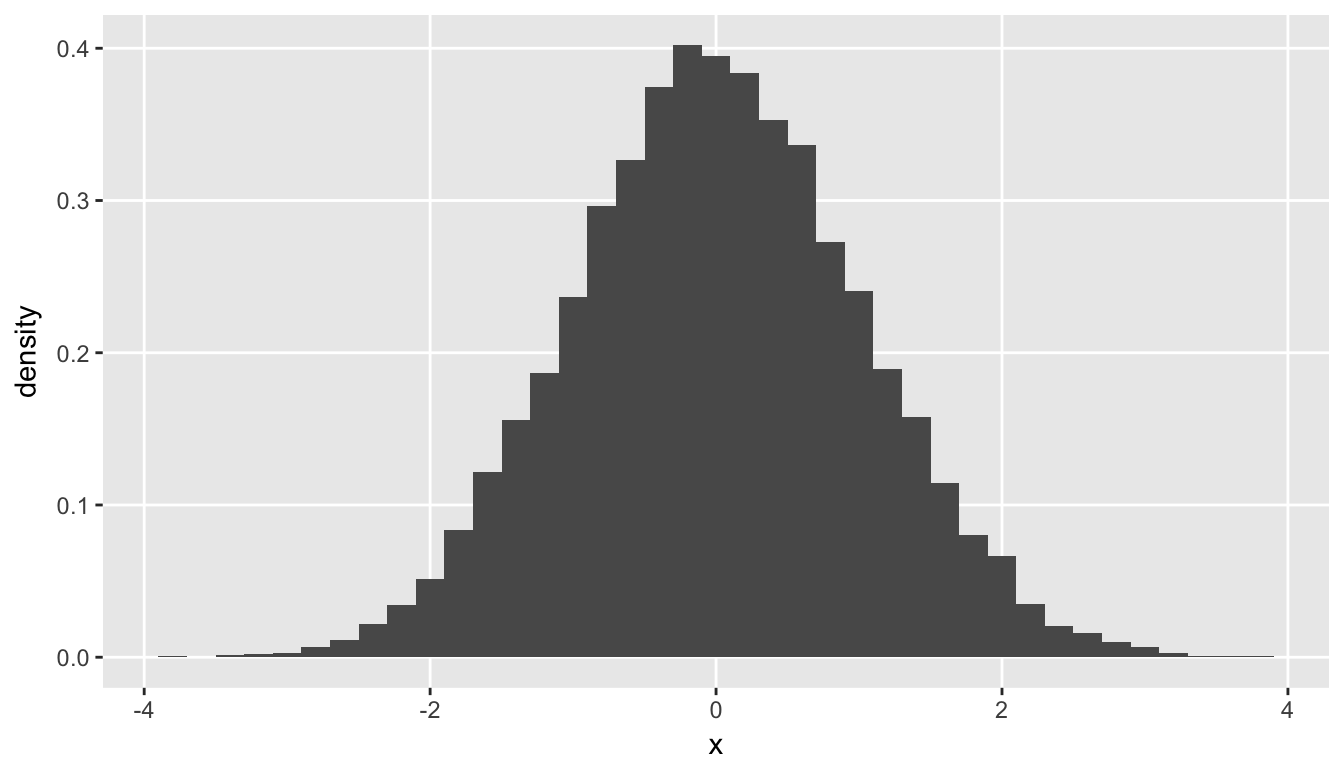 Since the statistic \(X^2\) (try not to confuse \(X^2\) and \(\chi^2\), unfortunate I know) is the sum of the squares of a continuous random variable and is always greater or equal to zero, the \(\chi^2\) is a distribution of positive, continuous measures. Here is a histogram of chisq1df from the data set dt, which has a \(\chi^2_1\) distribution: 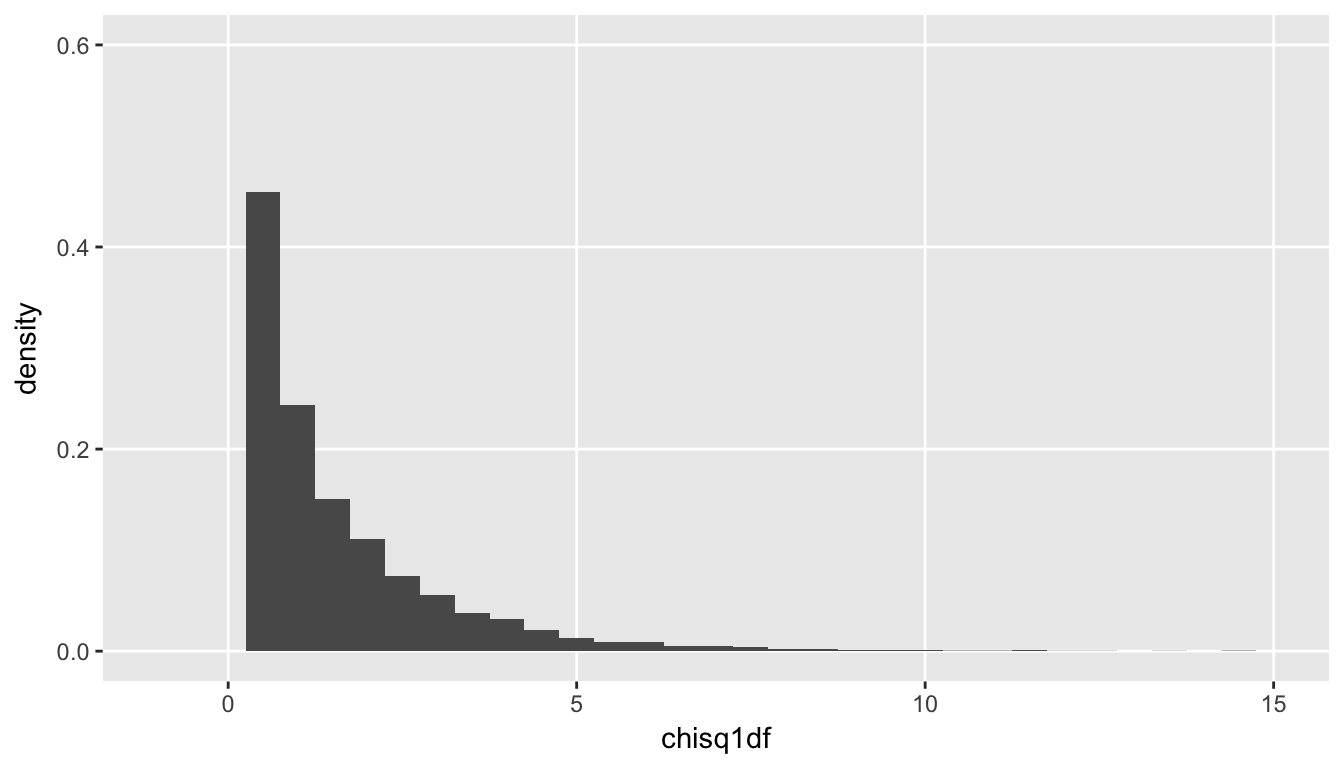 And here is a plot of chisq2df, which has two degrees of freedom, and has a \(\chi^2_2\) distribution. Unsurprisingly, since we are adding positive numbers, we start to see values further away from zero: 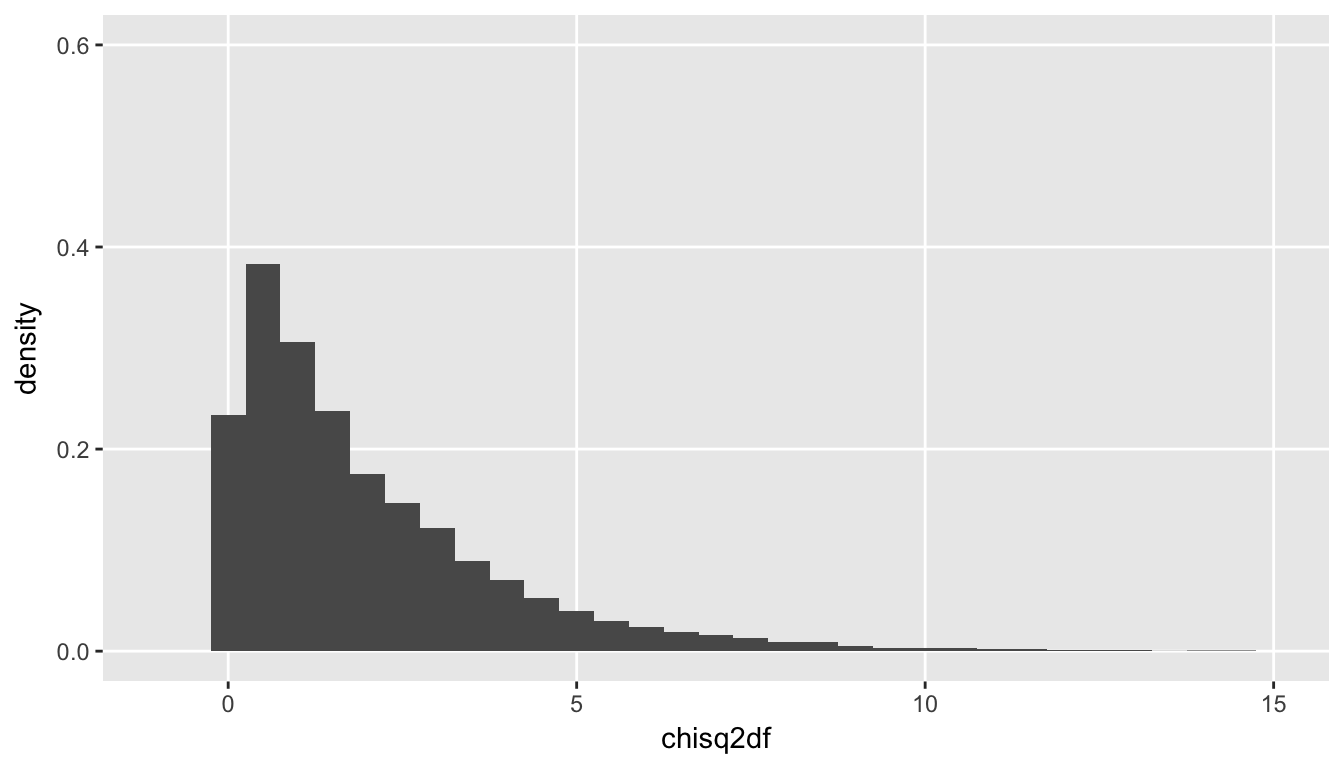 Just to show that the data we generated by adding two squared standard normal random variables is actually distributed as a \(\chi^2_2\), we can generate data from this distribution directly, and overlay the plots: 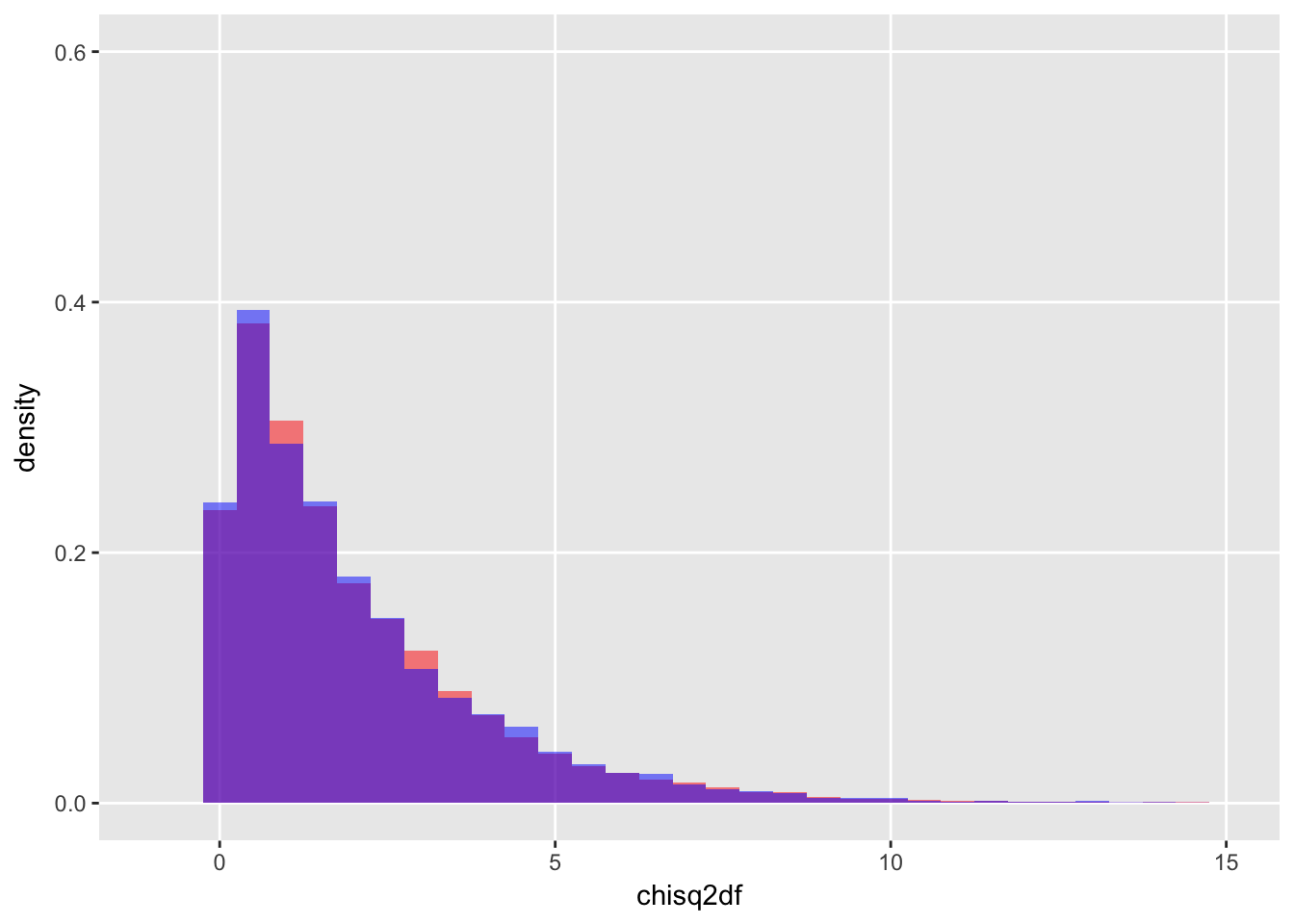 Recycling and the Poisson distribution

When we talk about counts, we are often dealing with a Poisson distribution. An example I use below is the number of glass bottles that end up in an apartment building’s recycling bin every day (as I mentioned, I do live in New York City). The Poisson distribution is a non-negative, discrete distribution that is characterized by a single parameter \(\lambda\). If \(H \sim Poisson(\lambda)\), then \(E(H) = Var(H) = \lambda\).

To standardize a normally distributed variable (such as \(W \sim N(\mu,\sigma^2)\)), we subtract the mean and divide by the standard deviation:

The distribution of this standardized variable \(S\) will be close to a standard normal. We can generate some data and check this out. In this case, the mean and variance of the Poisson variable is 40: 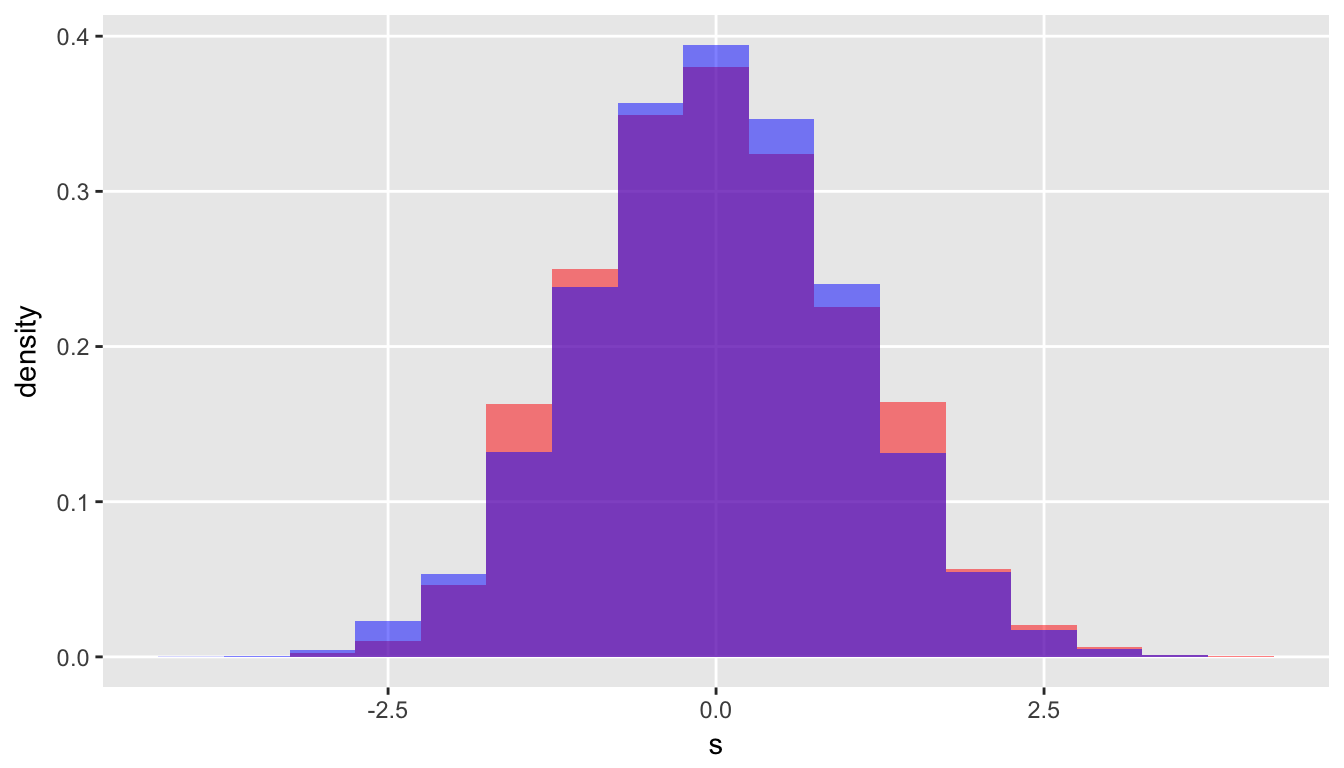 Or maybe in a more familiar form (think Pearson):

Adding the transformed data to the data set, and calculating the mean and variance, it is apparent that these observations are close to a \(\chi^2_1\) distribution:

Once again, an overlay of the two distributions based on the data we generated shows that this is plausible: 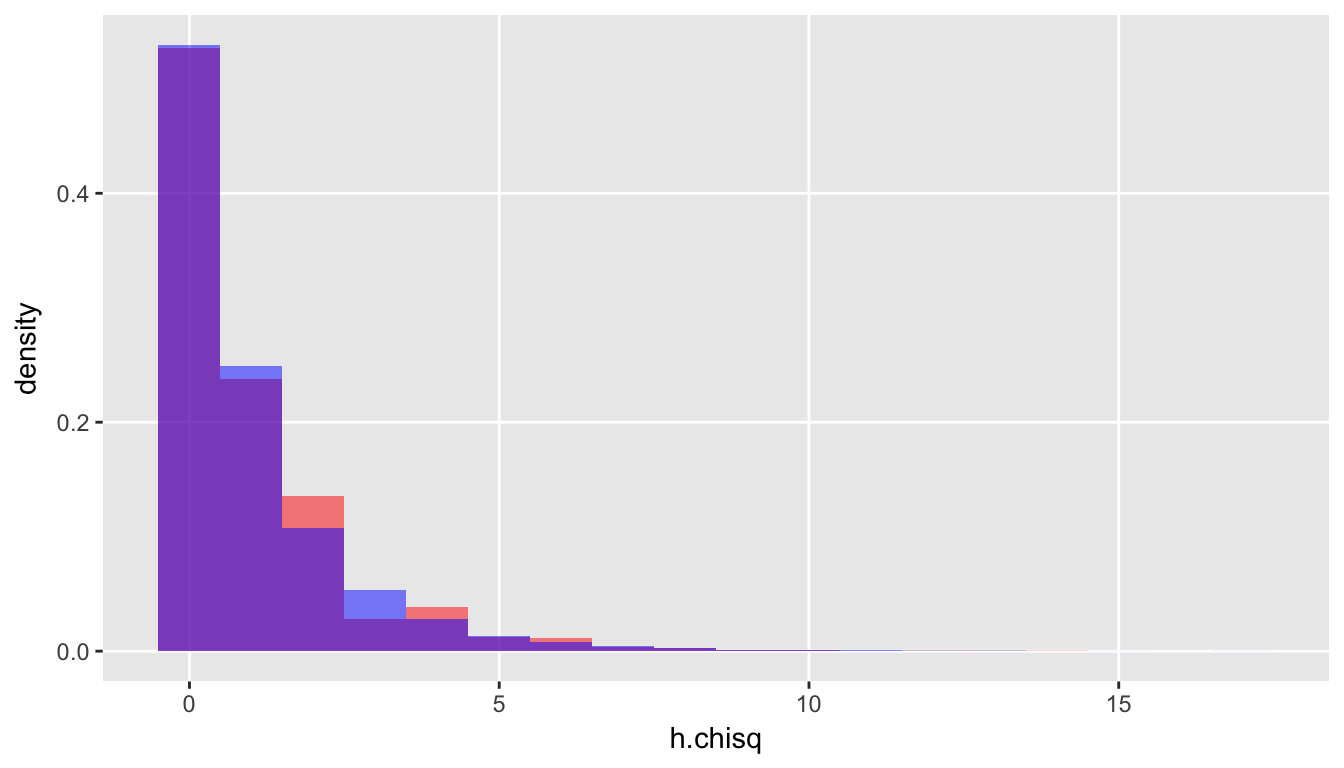 Just for fun, let’s repeatedly generate 10 Poisson variables each with its own value of \(\lambda\) and calculate \(X^2\) for each iteration to compare with data generated from a \(\chi^2_{10}\) distribution:

Each column (variable) has its own mean and variance:

Calculate \(X^2\) for each iteration (i.e. each row of the matrix poisMat), and estimate mean and variance across all estimated values of \(X^2\):

The true \(\chi^2\) distribution with 10 degrees of freedom:

These simulations strongly suggest that summing across independent standardized Poisson variables generates a statistic that has a \(\chi^2\) distribution.

The consequences of conditioning

If we find ourselves in the situation where we have some number of bins or containers or cells into which we are throwing a fixed number of something, we are no longer in the realm of independent, unconditional Poisson random variables. This has implications for our \(X^2\) statistic.

As an example, say we have those recycling bins again (this time five) and a total of 100 glass bottles. If each bottle has an equal chance of ending up in any of the five bins, we would expect on average 20 bottles to end up in each. Typically, we highlight the fact that under this constraint (of having 100 bottles) information about about four of the bins is the same as having information about all five. If I tell you that the first four bins contain a total of 84 bottles, we know that the last bin must have exactly 16. Actually counting those bottles in the fifth bin provides no additional information. In this case (where we really only have 4 pieces of information, and not the the 5 we are looking at), we say we have lost 1 degree of freedom due to the constraint. This loss gets translated into the chi-square test.

I want to explore more concretely how the constraint on the total number of bottles affects the distribution of the \(X^2\) statistic and ultimately the chi-square test.

Consider a simpler example of three glass recycling bins in three different buildings. We know that, on average, the bin in building 1 typically has 20 bottles deposited daily, the bin in building 2 usually has 40, and the bin in building 3 has 80. These number of bottles in each bin is Poisson distributed, with \(\lambda_i, \ i \in \{1,2, 3\}\) equal to 20, 40, and 80, respectively. Note, while we would expect on average 140 total bottles across the three buildings, some days we have fewer, some days we have more - all depending on what happens in each individual building. The total is also Poisson distributed with \(\lambda_{total} = 140\).

Let’s generate 10,000 days worth of data (under the assumption that bottle disposal patterns are consistent over a very long time, a dubious assumption).

The means and variances are as expected:

This plot shows the actual numbers of bottles in each bin in each building over the 10,000 days: 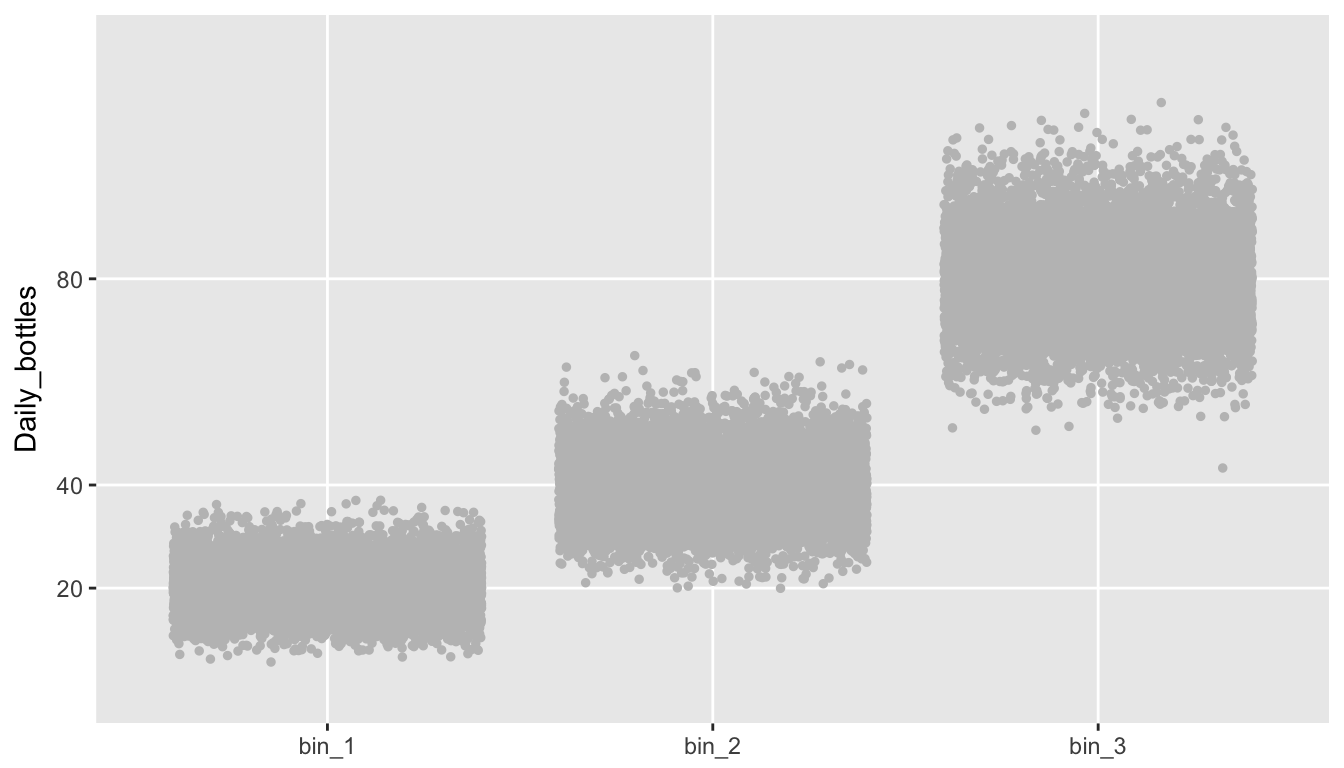 There is also quite a lot of variability in the daily totals calculated by adding up the bins across three buildings. (While it is clear based on the mean and variance that this total has a \(Poisson(140)\) distribution, the plot looks quite symmetrical. It is the case that as \(\lambda\) increases, the Poisson distribution becomes well approximated by the normal distribution.) 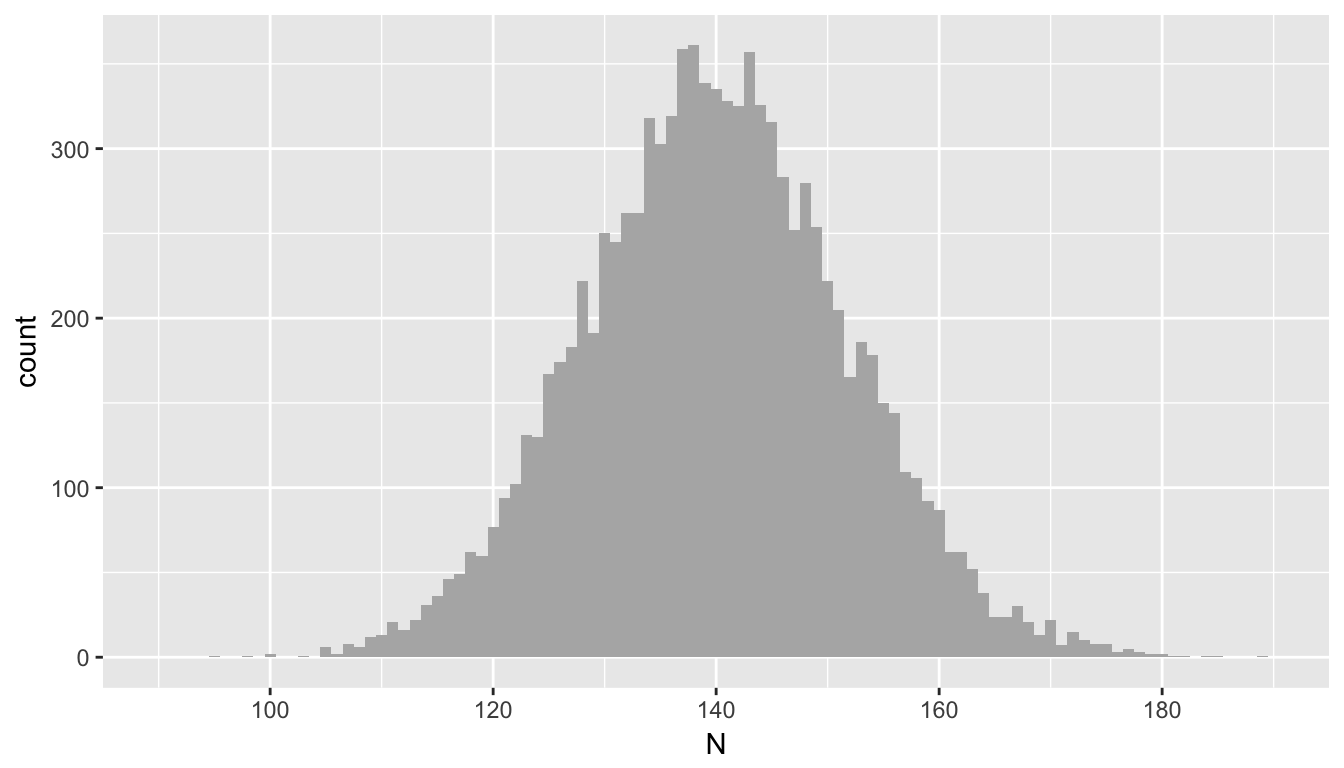 Now, let’s say that the three bins are actually in the same (very large) building, located in different rooms in the basement, just to make it more convenient for residents (in case you are wondering, my bins are right next to the service elevator). But, let’s also make the assumption (and condition) that there are always between 138 and 142 total bottles on any given day. The expected values for each bin remain 20, 40, and 80, respectively.

We calculate the total number of bottles every day and identify all cases where the sum of the three bins is within the fixed range. For this subset of the sample, we see that the means are unchanged:

However, and this is really the key point, the variance of the sample (which is conditional on the sum being between 138 and 142) is reduced:

The red points in the plot below represent all daily totals \(\sum_i bin_i\) that fall between 138 and 142 bottles. The spread from top to bottom is contained by the rest of the (unconstrained) sample, an indication that the variance for this conditional scenario is smaller: 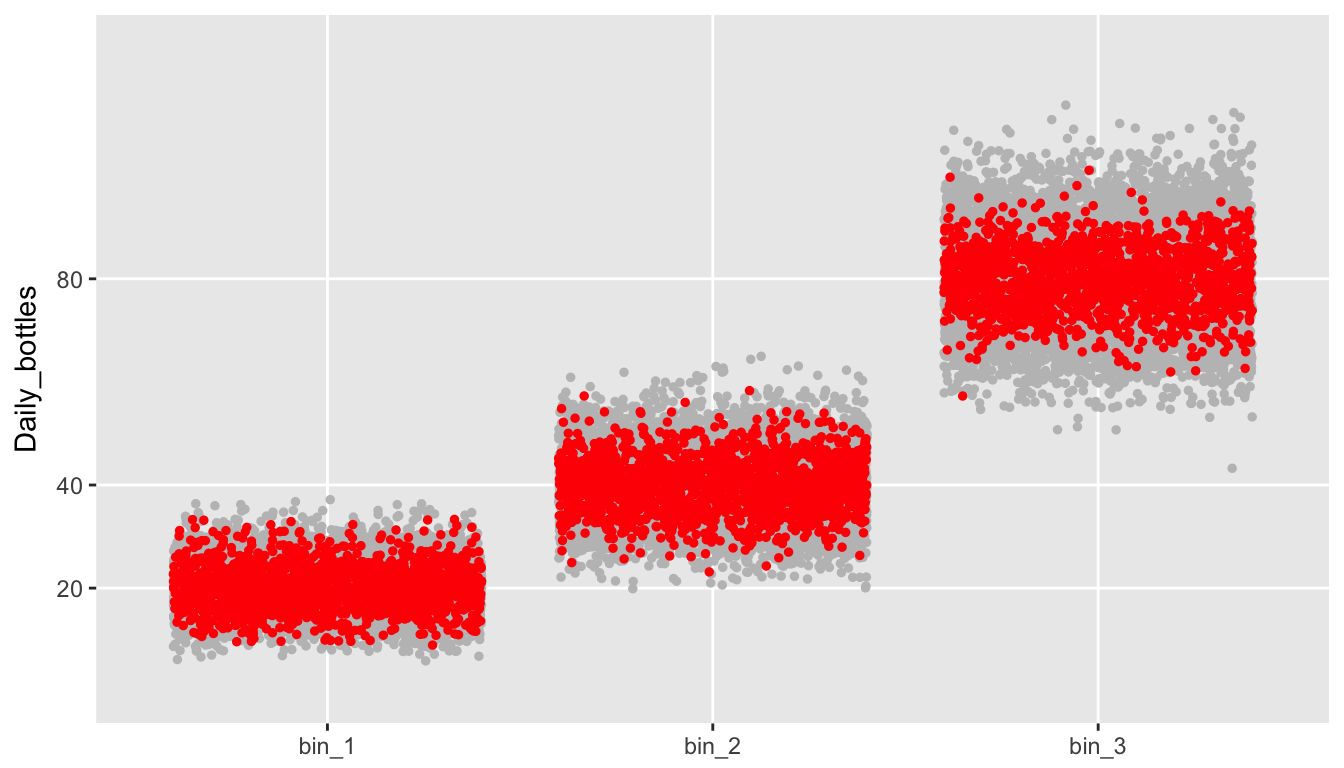 Not surprisingly, the distribution of the totals across the bins is quite narrow. But, this is almost a tautology, since this is how we defined the sample: 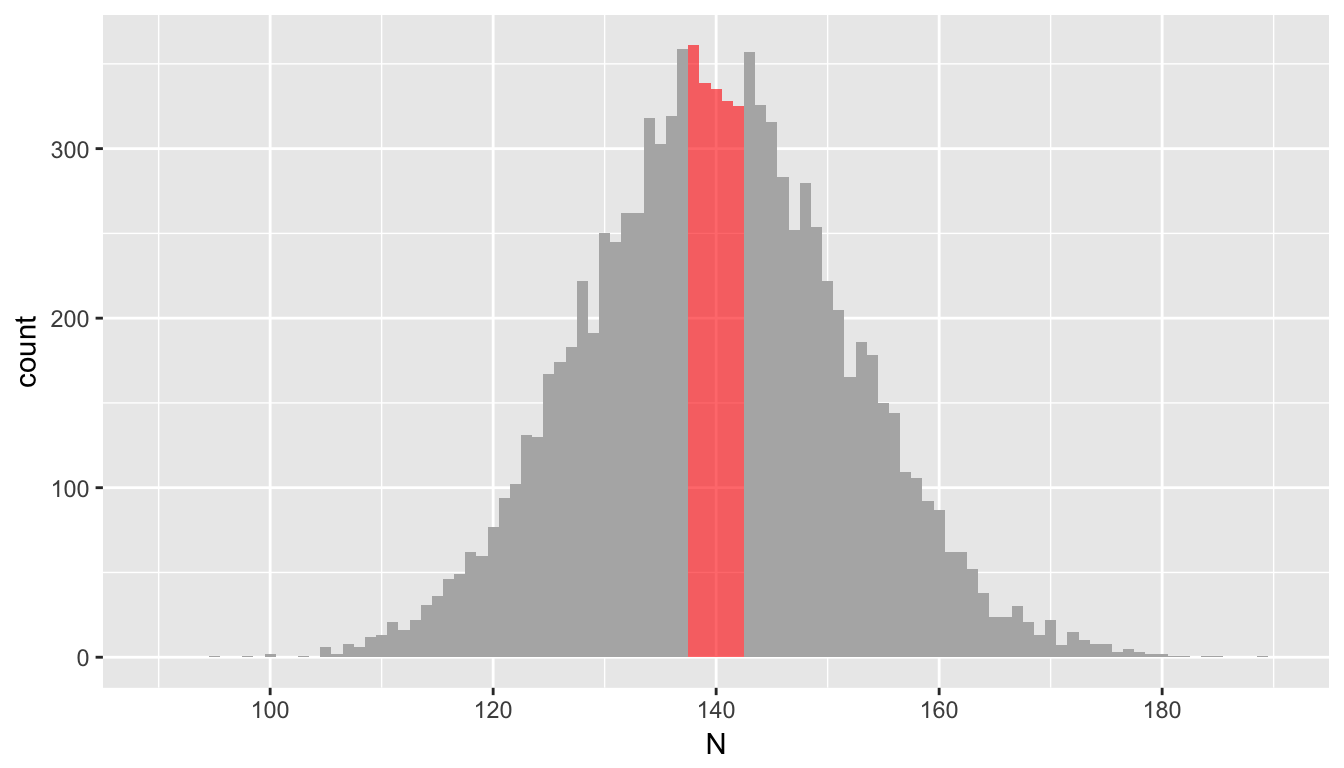 And here is the grand finale of part 1. When we calculate \(X^2\) using the standard formula under a constrained data generating process, we are not dividing by the proper variance. We just saw that the conditional variance within each bin is smaller than the variance of the unconstrained Poisson distribution. So, \(X^2\), as defined by

is not a sum of approximately standard normal variables - the variance used in the formula is too high. \(X^2\) will be smaller than a \(\chi^2_k\). How much smaller? Well, if the constraint is even tighter, limited to where the total equals exactly 140 bottles every day, \(X^2\) has a \(\chi^2_{k-1}\) distribution.

Even using our slightly looser constraint of fixing the total between 138 and 142, the distribution is quite close to a \(chi^2_2\) distribution: 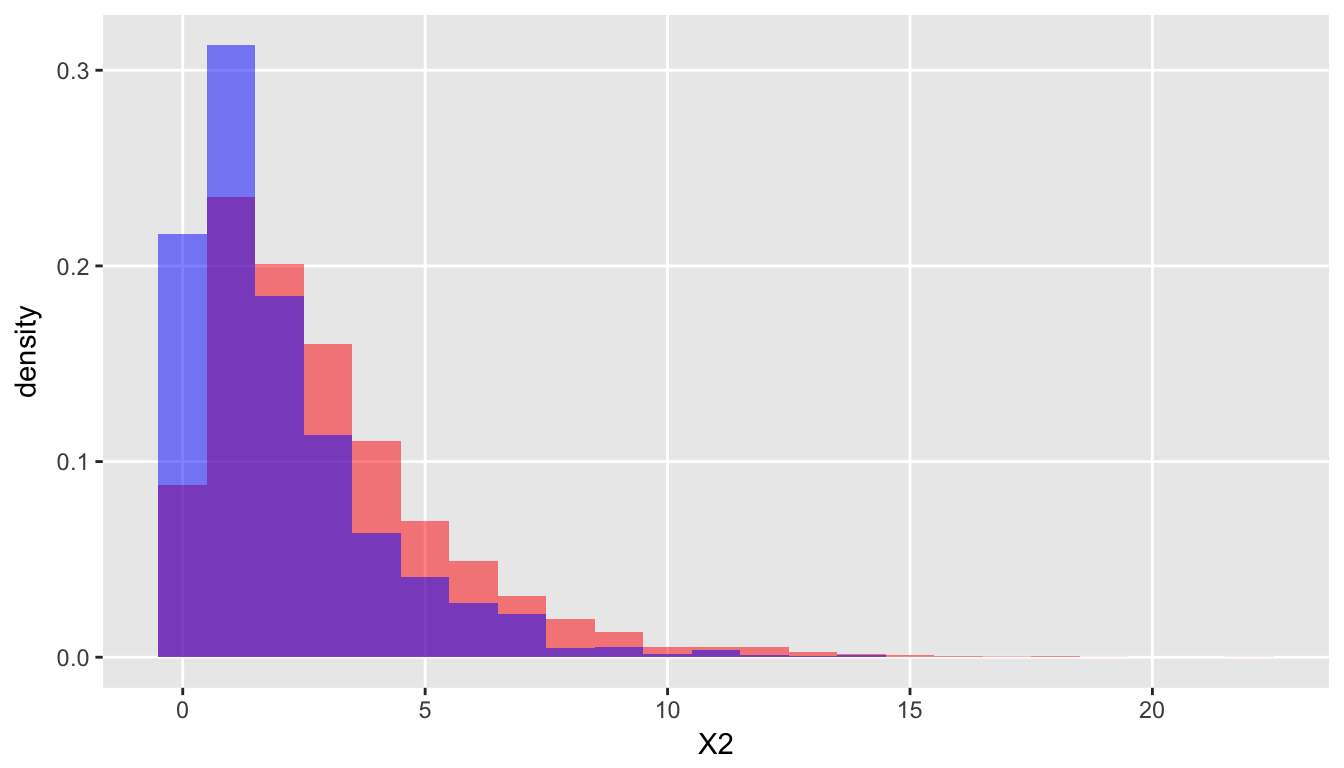 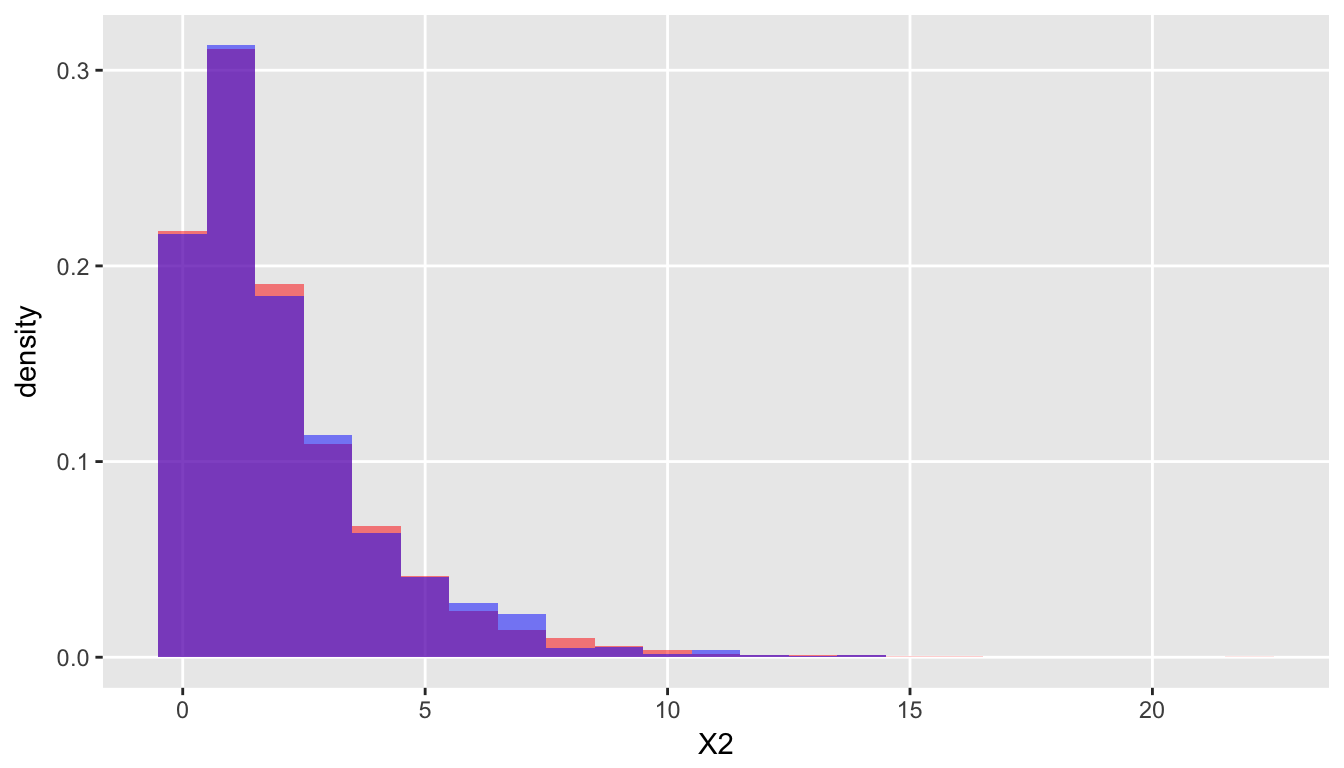 Part 2 will extend this discussion to the contingency table, which is essentially a 2-dimensional array of bins. If we have different types of materials to recycle - glass bottles, plastic containers, cardboard boxes, and metal cans - we need four bins at each location. We might be interested in knowing if the distribution of these four materials is different across the 3 different locations - this is where the chi-square test for independence can be useful.

As an added bonus, you can expect to see lots of code that allows you to simulate contingency tables under different assumptions of conditioning. I know my kids are psyched.