I thought it would be illuminating to analyze a single data set using different causal inference methods, including IV as well as propensity score matching and inverse probability weighting. Each of these methods targets different causal estimands, which may or may not be equivalent depending on the subgroup-level causal effects and underlying population distribution of those subgroups.

This is the first of a two-part post. In this first part, I am focusing entirely on the data generation process (DGP). In the follow-up, I will get to the model estimation.

Underlying assumptions of the DGP

Since the motivation here is instrumental variable analysis, it seems natural that the data generation process include a possible instrument. (Once again, I am going to refer to elsewhere in case you want more details on the theory and estimation of IV models. Here is an excellent in-depth tutorial by Baiocchi et al that provides great background. I’ve even touched on the topic of CACE in an earlier series of posts. Certainly, there is no lack of discussion on this topic, as a quick search around the internet will make readily obvious.)

The figure below is a variation on the directed acyclic graph (DAG) that is often very useful in laying out causal assumptions of a DGP. This particular figure is a type of SWIG: single world intervention graph. SWIGs, developed by Robins and Richardson, fuse the worlds of potential outcomes and DAGs.

The workhorse of this data generating process is a logistic sigmoid function that represents the mean potential outcome \(Y^t\) at each value of \(u\). This allows us to easily generate homogeneous or heterogeneous causal effects. The function has four parameters, \(M\), \(\gamma\), \(\delta\), and \(\alpha\):

Here is a single curve based on an arbitrary set of parameters:

The figures below show the mean of the potential outcomes \(Y^0\) and \(Y^1\) under two different scenarios. On the left, the causal effect at each level of \(u\) is constant, and on the right, the causal effect changes over the different values of \(u\), increasing rapidly when \(0 < u < 0.2\).

Here’s a closer look at the the different causal effects under the first scenario of homogeneous causal effects across values of \(u\) by generating some data. The data definitions are provided in three steps. In the first step, the confounder \(U\) is generated. Think of this as health status, which can take on values ranging from \(-0.5\) to \(0.5\), where lower scores indicate worse health.

Next up are the definitions of the potential outcomes of treatment and outcome, both of which are dependent on the unmeasured confounder.

(Though technically not a definition step, the instrument assignment (variable \(A\)) is generated later using trtAssign.)

Once all the definitions are set, it is quite simple to generate the data:

Looking at the data

Here are a few records from the generated dataset: 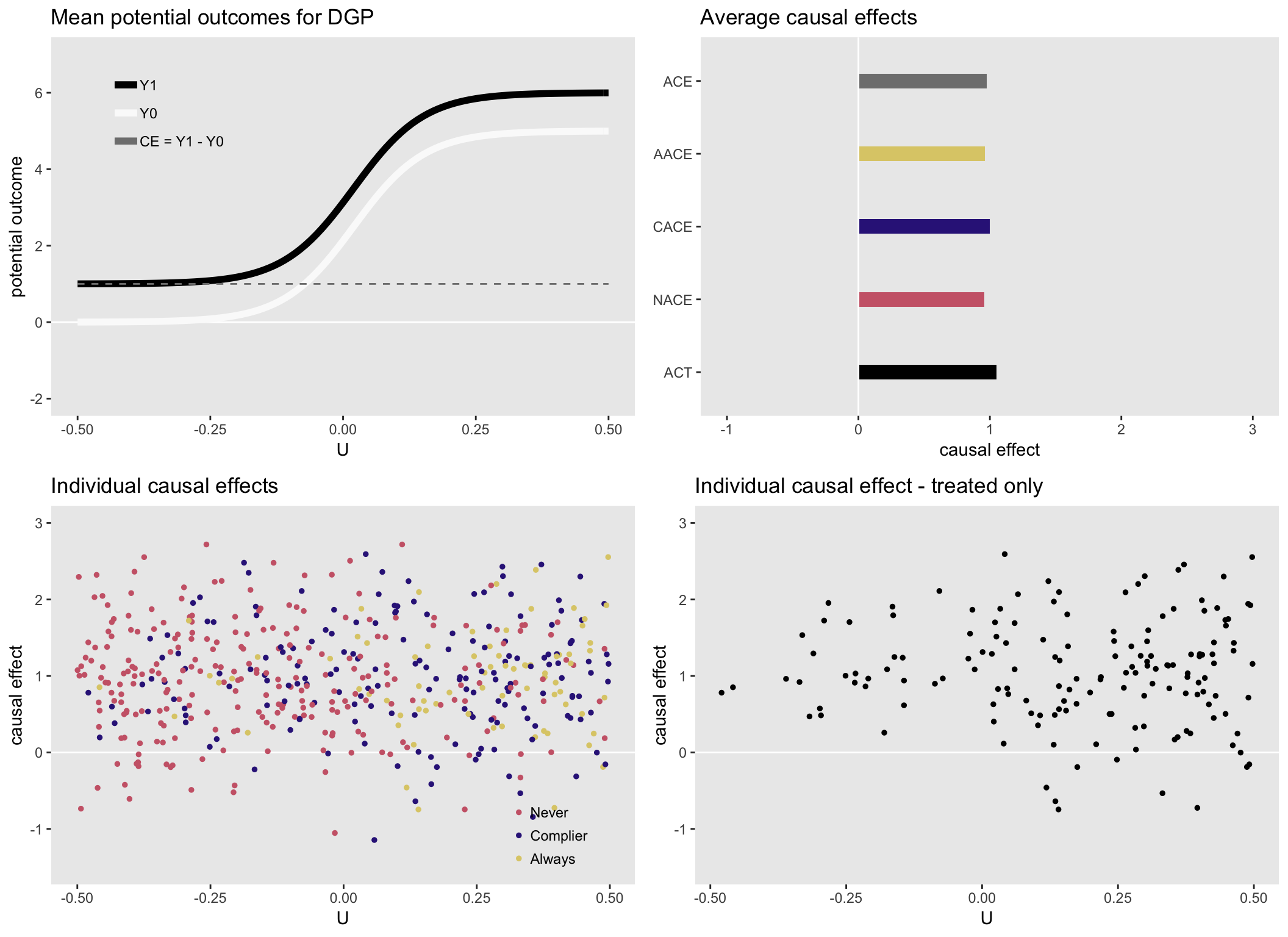 Here is a set of figures for a heterogeneous data generating process (which can be seen on the upper left). Now, the average causal effects are quite different from each other. In particular \(ACE < CACE < ACT\). Obviously, none of these quantities is wrong, they are just estimating the average effect for different groups of people that are characterized by different levels of health status \(U\): 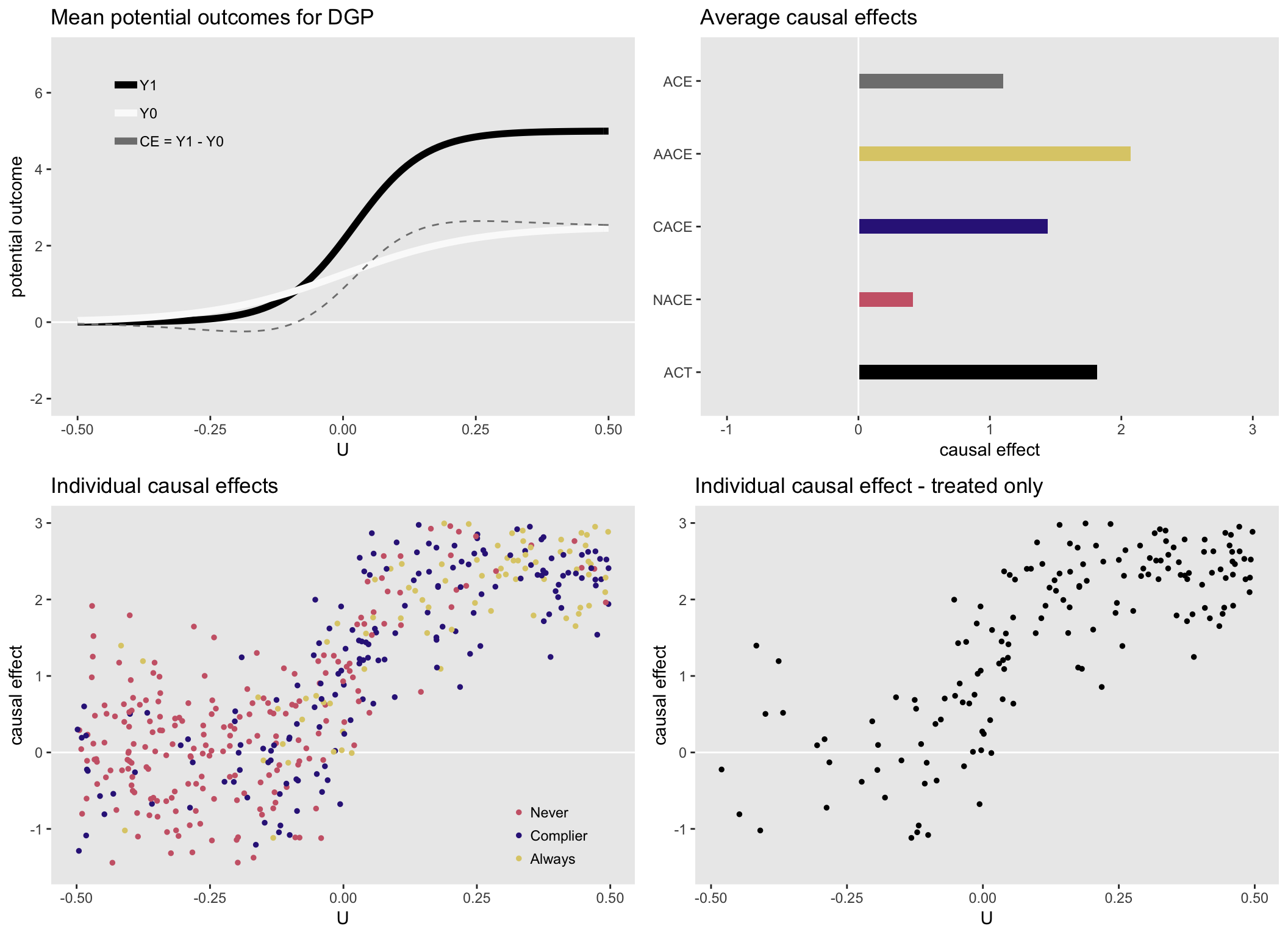 Finally, here is one more scenario, also with heterogeneous causal effects. In this case \(ACE \approx CACE\), but the other effects are quite different, actually with different signs. 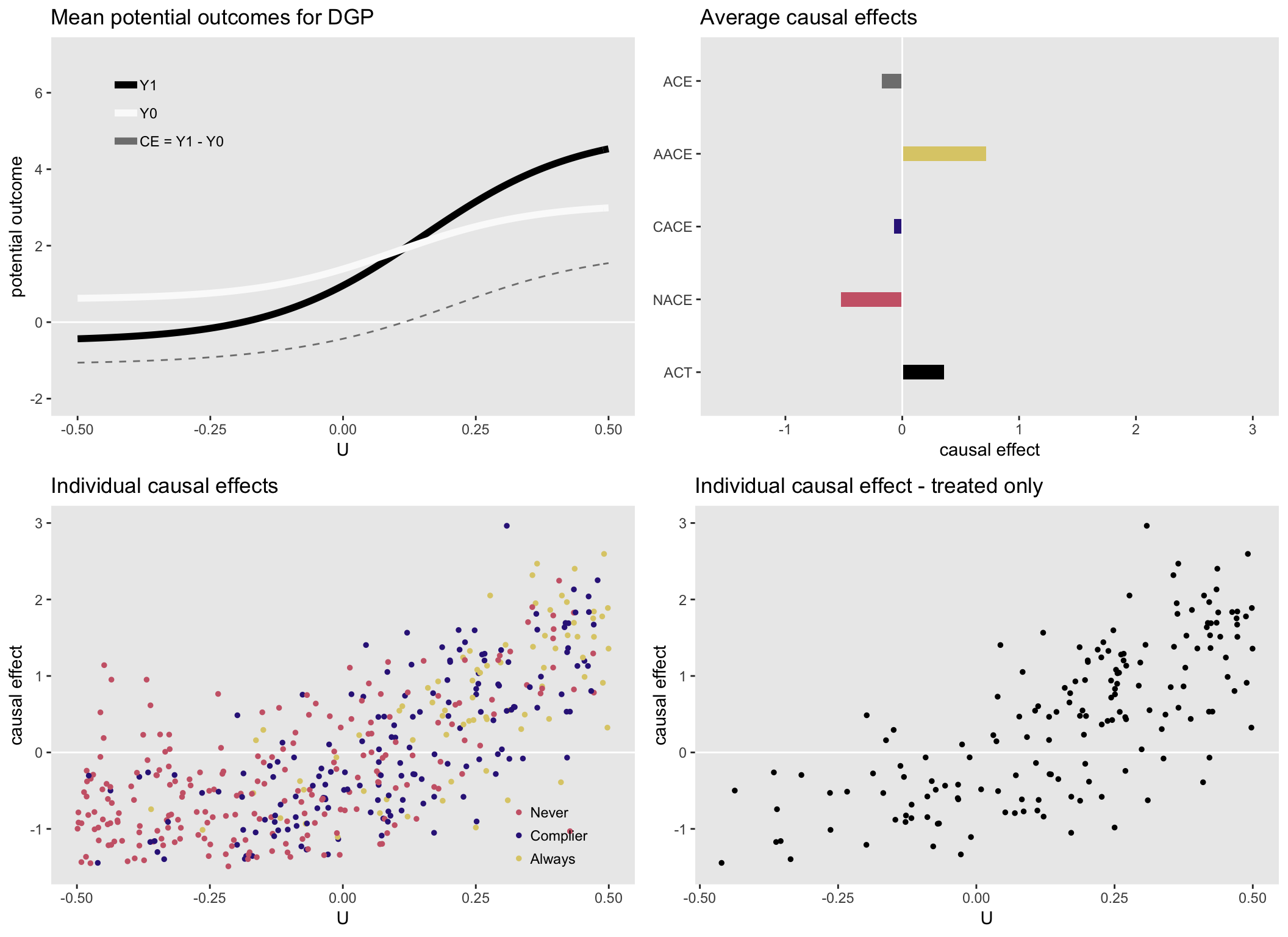 Next up: estimating the causal effects

In the second part of this post, I will use this DGP and estimate these effects using various modeling techniques. It will hopefully become apparent that different modeling approaches provide estimates of different causal estimands.